Fireplaces – should you choose electric, gas, open or a wood-burning stove?

When it’s cold outside, you can’t beat snuggling up in front of a fireplace. But with a wide variety of fuels, designs and heating appliances available, which one will work best for you? We take a look at some of the fireplace options on offer.

We all love the comfort of a fire on a cold day, but we’re not all looking for the same thing from our feature fireplaces. If you’re thinking about putting a fireplace into your home, the first question to ask yourself is whether you want a fire for effect, or for effective heating.

Read on to find out more about the different fireplace options – or, if you already know what you’re after, find a Which? Trusted Trader gas or electric fire installer in your area now.

Electric fires look good, and come in styles to suit all tastes. But the downside is they don’t kick out much – or, in some cases, any – heat. If the emphasis is on a feature, with the option of occasional heat, they can be a great option.

Regency Fireplaces’ Daniel Aspinall told us only around 30% of his customers choose electric fires. These work really well in modern buildings without a chimney or flue. They are perfect for people who want a low-fuss and low-cost decorative fireplace. 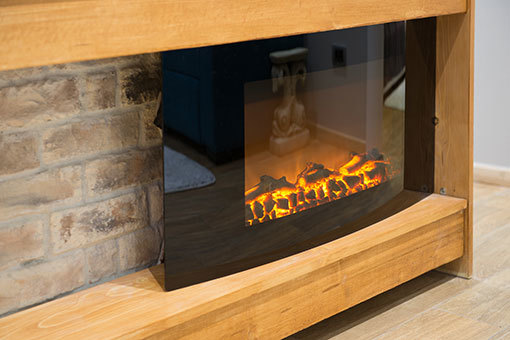 Daniel says the electric fire market has changed over the last few years: ‘It used to be for people who couldn’t have a gas fire, and the priority was making it cheap. What has happened now is that electric fires have developed to the point where they’re competing on design rather than price.’

Electric fires are a definite growth area, as more exciting designs appear on the market that you can put into existing fireplaces and recess into false chimney breasts.

Read the full Which? guide to electric fires and stoves.

If you want a fuss-free fireplace that will pump out plenty of heat, then a gas fire could be for you. Gas fires are clean and convenient and, these days, you don’t even need a chimney with a flue – some fires only require an outside wall. Designs range from traditional log-effect fires, to modern glass-fronted style statements to fit every budget. 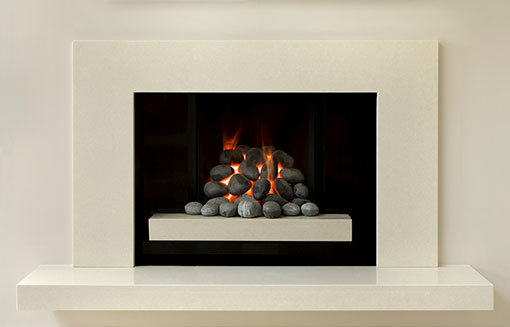 As with any gas appliance, gas fires need to be installed and maintained by a Gas Safe-approved engineer. You should also have a carbon monoxide alarm in the room if you’re burning anything, whether that’s gas, wood, coal or oil.

Read the full Which? guide to gas fires and stoves, or search for a Gas Safe engineer in your area.

But what about if you want to actually burn something? Traditional open fires are beautiful, allowing you to feel close to the scents and sensations of the open flames. They ensure that a room is permanently ventilated because of the air movement up the chimney. For people who want to maintain the original features of an older property, they are hard to beat. 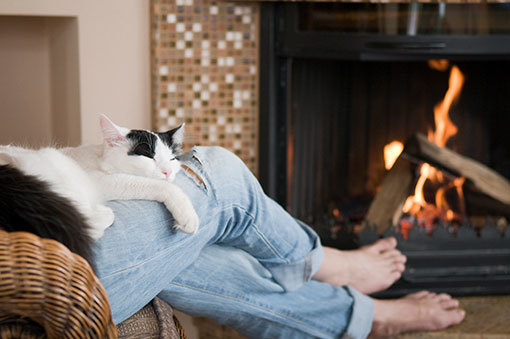 Wilkins Chimney Sweeps’ Peter Harris says, ‘If people want it for effect, an open fire is the nicest. But for an efficient form of heating, it’s got to be a wood burner every day.’ Wood burners are approximately 80% efficient, with the ability to regulate the heat they provide and how fast they burn their fuel. While open fires can provide a reasonable source of heat, they are only around 20% efficient. Most of the heat is lost up the chimney. This doesn’t sit well with the contemporary drive for energy efficiency.

‘If you buy an eco-design stove the efficiency is much better, allowing you to burn fewer logs and typically with much more control,’ says Daniel Aspinall of Regency Fireplaces. ‘Emissions are becoming a major factor in the industry, and stoves are having to improve to meet these standards.’

Read the full Which? guide to wood-burning stoves and heating systems.

Whether you choose an open fire or a wood-burning stove, both mean you’ll need to carefully maintain your chimney. We asked Peter Harris of Wilkins Chimney Sweeps for his recommendations on how best to look after your chimney.

​1. Have your chimney swept regularly. ‘The general recommendation from the Fire Service is that an open fire should be swept once a year,’ says Peter. ‘The Fire Service also says a wood burner should be swept every three months when in use. That doesn’t mean you have to do it four times a year. If you don’t use it during the summer months, once during the summer before the season starts and then once in January half way through the season is enough, to make sure everything is OK for the rest of the year.’

2. Find the right chimney sweep. When employing a chimney sweep, use someone who is a member of a trade association or working for an established company. Peter told us, ‘All sweeps will protect the carpet or the area in front of the fire or stove. It’s impossible to clean your chimney with a vacuum cleaner alone; a full-sized brush must be passed through the chimney a number of times. If you call somebody out, watch what they do, see how many times they pass the brush through the flue, and whether soot is being dislodged.

If you need someone to sweep your chimney, Which? Trusted Traders has chimney sweeps available in your area now.

3. Keep your fireplace clean. Clear any soot build-up that you can see. Some people forget to sweep the back of the fireplace if they’ve got an open fire – use this as an indicator of the soot further up the chimney.

4. Burn the correct fuel. Ensure you burn well-seasoned wood in a wood burner. Burning scrap materials can be quite dangerous and bad for the environment. For example, if you’re burning old fence panels that have been chemically treated, you’re releasing those chemicals. Never burn pine or leylandii, as these could damage your chimney – in some cases irreparably.

If you have a multi-fuel burner and a stainless steel liner, use either coal or wood each time. Do not use both simultaneously, as they can combine to produce a light acid which will corrode your liner. Some liners require replacing after as little as five years when fuels are mixed.