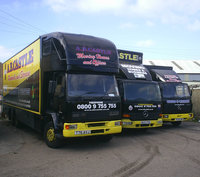 For premier removals services you can rely on, look no further than AB Castle. We provide friendly, professional services throughout Sheffield, Rotherham, South Yorkshire and nationwide to help take the stress and hassle out of your move. Our experienced team offer home removals and office removals, ensuring that all your needs are taken care of.

Areas we Cover
As a leading removals company we pride ourselves in delivering safe and efficient services for every customer to assist with your move or relocation. With our own fleet of vehicles and packing materials, we give you peace of mind when moving home or office.

In addition to removals, we also provide storage solutions for a variety of purposes, with warehouse facilities in Sheffield and Rotherham to cater for all the surrounding areas. Whether you need self-storage as a temporary solution or something more long-term, we provide secure storage at competitive prices. 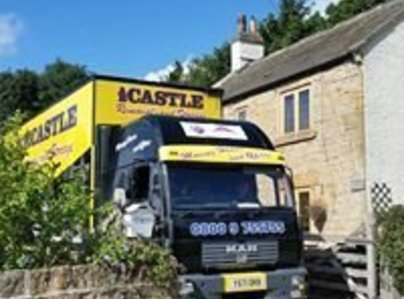 by 99% of customers
Sort by
Professional and great service
Customer Service
Quality
Value
Abcastle were great from start to finish. The removal guys that turned up to do my removal couldn't have done enough nothing was to much trouble for them they covered all my items to load onto the vehicle and also covered all our floors.They made my removal stress free. Would highly recommend and use again.
Customer in South Yorkshire Posted on 07/03/2022 , work completed 04/03/2022
Recommended
Awful - avoid if you can
Customer Service
Quality
Value
On the day we moved out they turned up late with the wrong sized truck, the correct lorry didn't arrive until 2 hours later. They had an insufficient number of people so as the day went on they had to call in more people, no one on -sight appeared to be in charge, when I asked they just shrugged their shoulders, although on the whole they were polite. The lack of organisation and communication caused them to pack a barometer that they had been asked not to move, it wasn't wrapped and should have been obvious, but it got put in the lorry and was damaged in the process. Our belongings were stored for a few weeks and on the day of delivery they turned up almost bang on time, however I was surprised that with and hour they were asking where the nearest shop was as they were hungry! I used to work away from home and always took a drink and sandwiches, but this didn't seem to have occurred to them, even though they were aware they were delivering to a rural village. The catalogue of damage to our furniture was staggering, they managed to smash two legs off a dining room table, I can't imagine how this actually happened, and it wasn't the only item damaged. They failed to deliver a set of ladders and I had to wait from July to November for these to be delivered, which they did only when I threatened to sue for breach of contract, hence only posting this review now. Their attitude appears to be if you pay for the insurance, it doesn't matter what happens.
Customer in Derbyshire Posted on 11/11/2021 , work completed 04/11/2021
Mr Higgins we are very sorry we made a stressful day even more stressful. The whole month of June was very busy because of the stamp duty. On the day of your removal to our storage the correct vehicle and number of staff was sent to your property. Due to the access the doors to the containers could not be accessed. We had to return to the warehouse and remove the containers losing hours of loading time. The manager and more staff members came to help with the loading to make up lost time. Staff asked if a full room was to be cleared for storage and on confirmation this was done, your barometer was wrapped and loaded onto the vehicle. Once we were aware of this it was immediately unwrapped and handed back to yourself. We were of the understanding you would be collecting your ladders when passing our warehouse. After your telephone call regarding your ladders we had them delivered to you immediately. Our insurance are still waiting on your quotes to have your items repaired. A B Castle are a member of the British Association Of Removers and operate their code of practice and terms & conditions.
House Move July 2021
Customer Service
Quality
Value
I have used AB Castle 3 times over the last 10 years and would not consider using anyone else. The service received, from initial contact to removal day is always superb. Castle's admin team ensure all is in order prior to the agreed date and on the day, the removal team are polite, friendly and incredibly efficient. I 100% recommend this company for your house move!
Customer in Derbyshire Posted on 29/07/2021 , work completed 23/07/2021
Recommended
My review
Customer Service
Quality
Value
Excellent, efficient service
Which? Trusted Traders Consumer Posted on 29/07/2020 , work completed 21/07/2020
Recommended
Helpful
Customer Service
Quality
Value
3 members of staff, all worked very hard, all were polite, helpful and accommodating. Nothing was too much trouble.
Vanessa, South Yorkshire Posted on 23/07/2020 , work completed 26/06/2020
Recommended
Professional & friendly service
Customer Service
Quality
Value
Simon & Clint provided an excellent service from start to finish, fast, efficient & careful throughout. Thanks
Andrew, South Yorkshire Posted on 23/07/2020 , work completed 12/06/2020
Recommended
My review
Customer Service
Quality
Value
Lads worked hard made sure item were carefully loaded and unloaded but a little disappointed we didn't get a larger van as requested resulting in having to make 2 trips and costing more than expected.
Anthony, Derbyshire Posted on 19/06/2020 , work completed 12/06/2020
Recommended
Professional & friendly
Customer Service
Quality
Value
I've got to be truthful, it was so very stressful this morning. But as they day went on it seemed to get mor relaxed but tiring. Removal men were very friendly & would do anything. Thank you
Which? Trusted Traders Consumer Posted on 09/06/2020 , work completed 19/05/2020
Recommended
My review
Customer Service
Quality
Value
A great job considering the location of my new property and the layout inside.
Linda, Nottinghamshire Posted on 19/03/2020 , work completed 19/03/2020
Recommended
Timely arrival, professional service.
Customer Service
Quality
Value
Great pair of guys. Friendly and helpful. Highly recommend.
Emma, Oxfordshire Posted on 19/03/2020 , work completed 19/03/2020
Recommended
Which? Trusted Traders