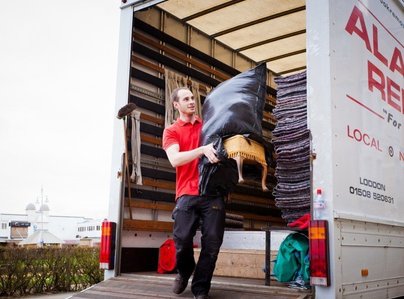 by 90% of customers
Sort by
Professional, courteous and efficient
Customer Service
Quality
Value
We used Alan Cook to move two van loads to our new home. They were on time, quick and efficient. The move went without a hitch, with no damage to the furniture or the walls! Throughout the day they were courteous and hard working- job done by 3pm. Having moved several times over the last few years we found them by far and away the best removal guys. Would recommend them wholeheartedly- a very professional outfit.
Customer in Norfolk Posted on 14/07/2019 , work completed 05/07/2019
Recommended
Care with storage
Customer Service
Quality
Value
We used this company to put two loads into storage - the first for one year and the second for 2 months. Whilst packing the second load the men rushed and left behind our canteen of cutlery and some boxes, which happily were looked after by relatives. When the load was returned to us a few items were missing, and still are, namely a large 3ft x 4ft ornate mirror, a heat mat sideboard protector, a kick-along hop up and a box of fabrics containing discontinued curtain hooks which I need. Some small items have been broken. I was given a smaller mirror along with some cds, which I returned as they were not mine. I have been chasing these items since July but with no luck. I have been offered £100 goodwill compensation, which I have refused. How can you lose a mirror of that size? I was never given an inventory for either load. If putting items into storage make a record of every item and get it signed for. Hopefully you will not have the same experience as me.
Customer in Suffolk Posted on 22/06/2019 , work completed 26/11/2018
Brilliant Service
Customer Service
Quality
Value
Our team from Alan Cooke were brilliant. From the friendly competitive quote and the men on the removal day. They made what was seeming like a stressful day to a very easy and relaxing day. The team were extremely professional and very funny. They put us at ease and nothing was too much trouble. all I had to do was make the tea :-) I would recommend Alan Cooke to anyone. Thanks again and hopefully we will get your boxes back to you soon!!
Customer in Norfolk Posted on 18/06/2019 , work completed 31/05/2019
Recommended
Outstanding service
Customer Service
Quality
Value
My daughter engaged the company to move furniture from the family home to her new house. We cannnot praise the team highly enough, the two young men who carried out the work were great, they were polite, careful, hard working and excellent in every way. We would not hesitate to recommend Cooks and will definitely use them again.
Customer in Norfolk Posted on 15/06/2019 , work completed 14/06/2019
Recommended
Excellent Service!
Customer Service
Quality
Value
We used Alan Cook Removals recently and could not praise them enough. The estimator Keith and the removal team Reggie and Jamie were extremely professional and nothing was too much trouble or effort for them. On the day they worked so hard from start to finish and they made a stressful experience of moving house into an easy one. Would definitely recommend!
Customer in Norfolk Posted on 05/06/2019 , work completed 25/04/2019
Recommended
Made amends for mistakes
Customer Service
Quality
Value
I entered a review of this company complaining of the poor admin and communication. I have to say since then the company has made a goodwill gesture to try to offset the stress we were caused. I feel that in light of this I can up rate their service to an extra star. The admin has now I trust been rectified and the communication problems I experienced been addressed. The actual removal itself was superb and I feel certain that the company will not allow the situation I experienced to be repeated.
Customer in Norfolk Posted on 19/12/2018 , work completed 23/10/2018
Recommended
Best in East Anglia
Customer Service
Quality
Value
Fantastic is all I can say. Fantastic, great, very good.
Customer in Suffolk Posted on 19/12/2018 , work completed 18/12/2018
Recommended
Lousy Admin and communication
Customer Service
Quality
Value
We hired this firm to move us from France to the UK. The van was over 6 hours late arriving and despite ringing their office several times to see why we were given no information by the office. The office staff were at times rude and impatient. When eventually the moving team arrived they worked tirelessly and had a friendly disposition. Due to the poor communication from the office staff we had a lot of needless stress. We were told that they would give us a discount due to the problems the delay caused us. Three weeks later we have heard nothing
Harnser48 Posted on 13/11/2018 , work completed 13/11/2018
brilliant job
Customer Service
Quality
Value
Just wanted to drop you a quick line to say what a brilliant job you all did it the removal of my parents home. From your prompt and professional response and organisation, to Keith and his spot on assessment, finishing with the wonderful removal guys themselves. If I ever need to recommend a removal company to anyone you will be first on my list. Thank you for making a very difficult time for me and my family so stress free.
Sam Posted on 12/04/2017 , work completed 12/04/2017
Recommended
Very Professional and Friendly Service
Customer Service
Quality
Value
We had a one day move from Norfolk to Derbyshire. Andy visited and quoted in a professional and friendly manner. This was replicated by the office and the removal staff on the day. We had an early start and a late finish and the whole hassle of moving was minimized. I do not usually write reviews but feel I ought to share our experience with others. Bryn Derbyshire
Bryn G Posted on 09/01/2017 , work completed 09/01/2017
Recommended
Which? Trusted Traders