Since our inception Gasworks has gathered a reputation for excellence and reliability. We are a Worcester Bosch Accredited family business which means clients enjoy our full focus and attention as opposed to being treated as just another job by larger faceless companies. Unfortunately cowboy engineers stain the industry with shoddy workmanship and poor ethics. At Gasworks we take pride in our work and we guarantee 100% satisfaction which is just one of the reasons why we receive so much repeat business.

Our qualified engineers are fully certified to the national standard as well as being accredited members of the Gas Safe Register. We can help service, maintain and install all your heating and plumbing needs including: 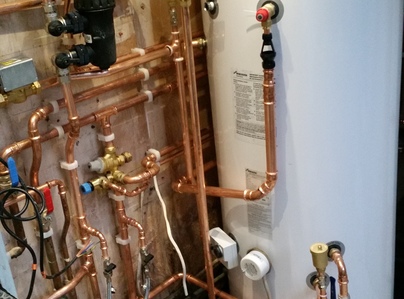 by 100% of customers
Sort by
Excellent efficient work
Customer Service
Quality
Value
Can highly recommend this company from there director Brendan to his installation staff They have carried out work on my behalf twice in the past month both times exactly as promised arrive on time and dates promised Highly knowledgeable polite helpful and clean workers Would have no hesitation using them again in the future
Customer in Hertfordshire Posted on 18/05/2022 , work completed 22/05/2016
Recommended
Excellent
Customer Service
Quality
Value
Our boiler needed to be replaced and it was a difficult job. Brendan took this on when others had refused. He and his team did a fantastic job, communication was excellent, we were constantly updated on progress, and the finished result was great. They were totally reliable and left everything beautifully clean and tidy. We have subsequently asked Brendan to do some work in the bathroom including fitting a new toilet. Again, this was complicated, but he did a really great job, and made sure everything was perfectly clean at the end. We have nothing but praise for Brendan and his team!
Customer in Greater London Posted on 07/05/2022 , work completed 12/11/2021
Recommended
Boiler Repair
Customer Service
Quality
Value
This is the first we had used Gasworks & were recommended by a friend, we contacted Brendan & he was really helpful & a engineer came out to us the next day to look at our boiler which had stopped working. Once on site the engineer found the fault & picked up the parts & changed. Very impressed with the speed & efficiency of the service. Many thanks to all the Team.
Philip in Greater London Posted on 08/02/2022 , work completed 25/01/2022
Recommended
Knowledgeable technicians and excellent service.
Customer Service
Quality
Value
We have been using Gasworks for more than ten years now and they have never let us down. They have deep knowledge of plumbing and heating systems and they are very trustworthy professionals. Brendan always arrives on time and fully explains the issues and the work he needs to carry out to address them. He is very careful and tidy individual and more importantly, knows what he is doing. Our experience has been very positive all these years and for this reason we fully recommend Gasworks.
Customer in Greater London Posted on 02/02/2022 , work completed 01/02/2022
Recommended
Reliable, professional and excellent work.
Customer Service
Quality
Value
I have used Gasworks twice now - first to replace my boiler, which they were able to do at short notice and to very high standards; second to replace some radiators and bathroom fixtures, which again they did to an excellent standard. It's always great giving business to an honest and trustworthy company. Will definitely use them again.
Mark in Hertfordshire Posted on 29/01/2022 , work completed 24/01/2022
Recommended
Replacement Central Heating Boiler
Customer Service
Quality
Value
When our very old boiler broke down and could not be repaired due to spares being unavailable, I found Gasworks details in local Trusted Traders. I was convinced they were people to deal with, as they have done several jobs for our neighbours, but confidence grew when Brendan arrived soon after the initial call, explained very fully the works that needed to be done, and later delivered a detailed and competitive quote. He also took the trouble to deal with another customer to reschedule their work so that we were not left without heat for too long. The team doing the work arrived when promised, got on with the work, and all was completed in two days. We now have a splendid new boiler, which has been working without trouble for two months. Thanks to all the team for the way they carried out the work. I have every confidence in Gasworks delivering as they promise!
Customer in Hertfordshire Posted on 24/01/2022 , work completed 25/11/2021
Recommended
Annual boiler service.
Customer Service
Quality
Value
Booked appointment for annual boiler service, operative was delayed by problems with an earlier customer but he called me to apologise and kept me advised of time of arrival. Very polite and professional operative, explained process, explained findings and outcomes. Clean and respected our home.
Customer in Hertfordshire Posted on 21/01/2022 , work completed 20/01/2022
Recommended
Swift response and excellent service
Customer Service
Quality
Value
We woke up to our boiler having broken. After finding Gasworks I called and they were round within a couple of hours and had sorted the issue. They were friendly, professional and helped to explain the issue to help me understand what had happened. It was extremely appreciated and I won't be hesitating to recommend their services and use them again in the future starting with a boiler service!
Customer Posted on 22/11/2021 , work completed 16/11/2021
Recommended
Excellent service
Customer Service
Quality
Value
We had a new combi boiler installed to replace the old style boiler. Lloyd from the moment he provided the quote to finishing the work with his team was thorough, professional and punctual. I was very happy with the quality of work and I was consulted throughout the process. He even came back separately to fix a leaky toilet solving another problem! I would 100% use this company again. Thanks Lloyd!
Karen in Hertfordshire Posted on 03/09/2021 , work completed 27/08/2021
Recommended
Excellent Service
Customer Service
Quality
Value
I would highly recommend Gasworks to anyone, the service from start to finish was excellent. Fast and efficient with brilliant communication throughout. Lloyd who looked after our boiler was a real pleasure to work with and kept us up to date with explaining everything thoroughly. In short, look no further an excellent company.
Customer in Hertfordshire Posted on 20/02/2021 , work completed 17/02/2021
Recommended
Which? Trusted Traders