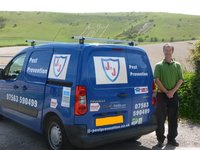 We have over twenty years experience within the Pest Control industry.Therefore we can quickly identify and rectify any pest issues you might be having.We carry out no obligation surveys and quotes, and we can arrange a service contract to suit you or your business needs.
We cover all areas of SUSSEX and our prices wont reflect on where you live.We are also experts in bird proofing and as B.P.C.A. members we are up to date with all legislative and innovative developments within the Pest Control industry.