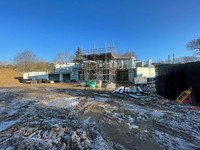 As a business we are fortunate to be growing and busy in all aspects of construction, basement conversion and below ground works. However, we believe in retaining that ‘small company’ attention to detail and personal service, so that our clients continue to return to us time and again. We have built good relationships in all areas of domestic and commercial work. We are proud of our reputation and receive most of our contracts from personal recommendation. We service London, Surrey and West Sussex.

No job is too small! Whether it is a cellar to convert for dry basement storage, a conservatory into a home extension, or the construction of a basement beneath your house with cinema and swimming pool; we can boast many ‘Grand Designs’ but are equally proud of the smallest garden room!

Surrey & London Basement Company Ltd comprises a group of experts, with a wealth of experience in commercial and domestic building especially now highly efficient, green new builds above and below. Try us.