We are a South West London based Removal Company with good access to all London and Surrey boroughs. We offer professional home relocations to any place in UK. When we handle the move you can sit back and relax.

If you are looking for a professional team to move your home we are people you want to speak to. Our team counts just a few members. Everyone experienced, skilled and friendly. As we offer a great value for money, we are sure you will be highly satisfied with our moving service. Our team will give their utmost care to your belongings and respect you and your family.

Whether you need a Man & Van service for few hours or complete pack and move service we do it all. We can pack and move all possessions you have at your home. If you wish to pack yourselves we may also deliver boxes and other packing materials to your door.

We hope to hear from you soon! 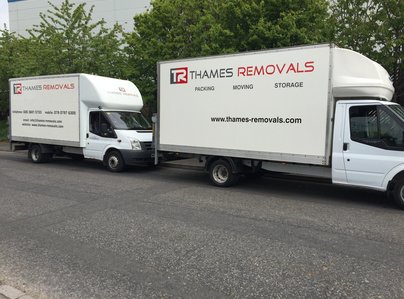 by 100% of customers
Sort by
Surbiton House Move
Customer Service
Quality
Value
They helped us move out of our flat and into a house. I cannot recommend Thames Removals highly enough. Krystian was very professional and friendly throughout working out what support we would need, how long for and then on the day itself. We went with the 2 vans and 2 men option and left 3 hours to clear an overfilled 2 bed garden flat. They arrived promptly, assessed the load and got to work straight away. I was really impressed by how quickly and methodically they cleared the flat. They used clean blankets everywhere to protect the carpets. The van was loaded securely with everything strapped in and we were off. After a brief lunch break whilst I collected the keys, we began unloading. Again Krystian and Charles worked relentlessly and quickly to get everything in the new house. They offered to help arrange further but we did not need to take them up on that. Everything was done by 1500 which was earlier than I had hoped.
Owen Gibbs Posted on 25/04/2017 , work completed 25/04/2017
Recommended
Excellent service!
Customer Service
Quality
Value
Removals from a third floor flat with limited access on a Sunday, 4 hr drive North and delivered to our new house.
DWood Posted on 25/04/2017 , work completed 25/04/2017
Recommended
Highly recommended!
Customer Service
Quality
Value
Thames Removals packed our flat one day and moved us the next. They made what can be a very stressful experience feel very manageable and stress free. Great attention to detail, specialist packaging and they worked in a quick and efficient manner. I wouldn't hesitate to recommend them.
Lisa Mac Posted on 24/04/2017 , work completed 24/04/2017
Recommended
Excellent
Customer Service
Quality
Value
House move from Pimlico to Clapham. The team were punctual, courteous and took great care with our belongings. Absolutely nothing was damaged or broken. Also provided excellent packing materials. Great value for money. Highly recommended.
H Cresswell Posted on 24/04/2017 , work completed 24/04/2017
Recommended
Removal of boxes and furniture from storage to new home
Customer Service
Quality
Value
Removal and transport of boxes and furniture from storage into new house. Excellent work, courteous people, they moved everything with great care.
Anthony Poh Posted on 23/04/2017 , work completed 23/04/2017
Recommended
When I next move house, Thames Removals will be the first people I call.
Customer Service
Quality
Value
Krystian and his team did a house move for me in November 2016, taking the contents of my flat from South-West to North-East London. The communication up to the moving day was spot on, as we discussed the size of the van required and any special requirements (e.g. protecting a large screen TV!). On the day, the team turned up early, ready to get going. Everything was packed and loaded onto the van within a couple of hours, leaving me to be able to clean properly before handing over the keys. There was a slight delay with gaining entry to the new house, but Krystian was very understanding. Once we were in, everything was handled very carefully and put into the correct rooms. There were no damages at all, which is testament to the care taken by the team. The invoice amount was the pre-agreed (and very reasonable) amount, but I'd have been happy to pay more. I should say that I'd previously employed Thames Removals to do a house move for my sister. At the time she was on dialysis and was unable to do much more than supervise. Once again, they were brilliant, coming in and boxing everything up on one day, then back on the next to actually move. The actual move date slipped a couple of times and they were very accommodating. Thoroughly recommended! When I next move house, Thames Removals will be the first people I call.
LG Posted on 22/04/2017 , work completed 22/04/2017
Recommended
Which? Trusted Traders