My name is Trevor Risby and with over 35 years in the building industry I offer a high standard of quality workmanship for all your building requirements.
Specialising in extensions, loft conversions, kitchens, bathrooms and patios, we are happy to provide you with a free consultation and quote.
We look forward to helping you improve your home. 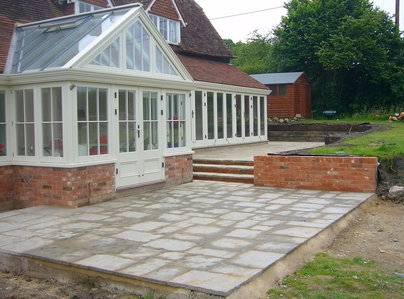 by 100% of customers
Sort by
Great job done very happy with the service recieved
Customer Service
Quality
Value
Trevor did an excellent job for us, he did all we required and more, he was a very clean worker and explained everything to us before carrying out any work so we knew exactly what was being done and why. We could not be more happy with the service provided and we will be using and recommending him in the future.
Alan in Greater London Posted on 20/05/2021 , work completed 14/05/2021
Recommended
Brilliant work on our home refurbishment
Customer Service
Quality
Value
Trevor from Total Building Care worked on our home refurbishment completing various different works. He was very professional, reliable and the work completed was always of an outstanding quality. He advised when we were making decisions and was always on hand to answer any questions we had. We will definitely use Trevor again for our next phase of works!
Customer in Greater London Posted on 10/01/2020 , work completed 21/12/2019
Recommended
Prompt and professional
Customer Service
Quality
Value
Trevor Risby of Total Building Care dealt promptly and efficiently with request for renewing roof of garden shed. He was helpful and pleasant to deal with, carried out the work quickly and well and I would recommend him.
Jonathan, London Posted on 21/02/2019 , work completed 21/02/2019
Recommended
Block Management
Customer Service
Quality
Value
Have had many different types of project from ground work to building or roof repairs completed satisfactorily. Can be trusted to suggest economic solutions to problems and apply skill to create a seamless solution within budget.
Mike Posted on 01/12/2018 , work completed 01/12/2018
Recommended
Review of TBC
Customer Service
Quality
Value
Total Building Care has carried out work on the Jubilee Hall in East Peckham for several years. All work has been professionally carried out. Immediate response to urgent building problems has been particularly appreciated especially as the Jubilee hall is a public building which is hired out to community groups and organisations. The latest work involved the replacement of the heating system.
EPPC Posted on 01/11/2018 , work completed 01/11/2018
Recommended
Extention and refurbishment
Customer Service
Quality
Value
Major refurbishment and extend 2 bed bungalow into 3 bed house. The work was carried out to a very high standard and on budget. The builder suggested some improvements along the way for which I remain grateful.
Geoff Posted on 30/06/2018 , work completed 30/06/2018
Recommended
Working with Trevor
Customer Service
Quality
Value
TBC carried out major extensions and refurbishment of our property over 18 months including all building trades, it comprised rear and side extensions, an additional floor over an old scullery to form a new master suite, a conservatory and extensive landscaping works. The work was entered into a competition (by me without TBC's knowledge) run by the D Telegraph and the Federation of Master Builders and won the award for SE England, it was a finalist in the UK wide competition. The work has also gained an award from the Civic Society. The work was executed to a high standard and the demeanour of TBC's operatives was a factor in reducing the trauma of such major works. The works were completed on budget although, mainly due to changes and extra works were completed later than originally planned. Since then TBC successfully converted another property of ours from an office to residential in 2014, again a successful project on time and budget. Trevor Risby the MD has a calm demeanour, little fazes him, he is polite and easy to work with, the costs are reasonable, we have worked with him own numerous other projects.
PC Tunbridge Wells Posted on 30/05/2018 , work completed 30/05/2018
Recommended
Which? Trusted Traders