Gas Boiler Repairs in Sutton and Boiler Installations in Sutton

If you require a Plumber in Sutton or Gas Boiler Repairs in Sutton then call RMT Plumbing today.

Not only do we handle Gas Boiler Installations but we can offer central heating servicing and repairs. We cover a wide area from Sutton to London including Merton and Wandsworth. When you call us out you can be assured of a warm welcome with a friendly yet professional service for your Boiler Repair or Central Heating Installation thats Gas Safe Registered.

We have over 35 years experience in the Plumbing industry providing an efficient service that you can trust and being Gas Safe registered you are in safe hands.

Some of the central heating services we offer include: 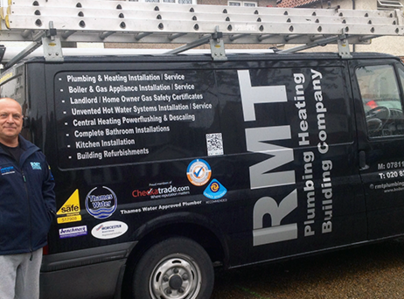 by 86% of customers
Sort by
Excellent service from local plumber
Customer Service
Quality
Value
A hidden water leak that has caused significant damage was repaired quickly, efficiently and professionally by RMT plumbers. I would certainly recommend him on price, quality and courtesy. Roy treated the work and me respectfully and was careful and reassuring. He gave good advice about what actions to take next. I was very happy and would certainly call on him for more plumbing work in the future.
Judith Posted on 30/04/2020 , work completed 29/04/2020
Recommended
Leaking shower fixed & kitchen taps fitted
Customer Service
Quality
Value
Roy fixed my leaking shower and I've had no issues since. He also replaced my kitchen taps and the new ones look great. I found Roy to be extremely polite and friendly, the work was reasonably priced and everything was left tidy and clean. I'll definitely use this service again.
Customer in Greater London Posted on 31/03/2020 , work completed 20/02/2020
Recommended
RMT PLUMBING AND HEATING (ROY KING) CHEATED A PENSIONER IN HER 80's. DO NOT TRUST THIS MAN. DO NOT USE HIS SERVICES.
Customer Service
Quality
Value
I am a widowed pensioner in my 80's I originally found Roy King from a "Checkatrade" card placed through my door. He had done two small jobs for me in 2019 that appeared priced more or less reasonably. Therefore, in December when I had a problem with my gas central heating, I called him to fix it. The programmer, which controls the heating and hot water, was not working correctly but Roy King looked at the system and told me he needed to buy a different part. An hour or so later he returned with a motorised valve unit, not a programmer. He replaced the motorised valve head (not the body that would require draining the central heating system) which took him only half an hour approx. After he finished he told me to sit down and then gave me the price. It was £500 for the job. I paid him cash, which he wanted, and he did not give me a receipt or invoice. I discussed the job with my sons the following week and it became very clear that Roy King had cheated me. The part only costs around £107 retail from Screwfix. He probably bought it for less from a plumber's merchant since he is in the trade. That means he charged me around £400 labour for half an hour's work and some travelling time to collect the part. He lives only 5 to 10 minutes from my home. To add insult to injury the heating still was not working well after he left. Later, I discovered the problem was not the motorised valve head but the programmer. I got this changed in January by another plumber who charged me £65 labour and £85 for the part. The heating now works perfectly. In summary, not only was as I overcharged for the motorised valve head and the labour but it was not necessary to change at all. This indicates Roy King is at a minimum dishonest, if not also incompetent. I have called him numerous times since Christmas. The first time I spoke with him, he informed me he had "cashflow" problems and did not know why he overcharged me. He promised to look into it. Having conducted some investigations, this man drives a £40,000 white Mercedes sports car with a personalised number plate and enjoys several holidays abroad annually - not exactly consistent for a person with "cashflow" problems He currently calls his business RMT Plumbing and Heating but having checked Companies House he also had various companies registered using the "Worcester" name (since dissolved) giving the impression he was in some means connected to Worcester Bosch Boilers. His current website "Worcester Boilers Ltd" worcesterboilersltd.co.uk also gives the impression that his business is reputable by using the "Worcester" name. His business is in Sutton, Surrey not in Worcester (the town) and neither is there anything to indicate Worcester Bosch approves him. This I feel is misleading. Finally, he has not repaid the money nor answered me since the first call after Christmas, despite numerous leaving voicemails. He has many good reviews on Checkatrade, although perhaps he only takes advantage of pensioners and the vulnerable who may not have access to the internet to leave reviews. In addition, I understand checkatrade charges significant sums to be on its site. Therefore, it would appear not to be exactly impartial. Do not use RMT Heating and Plumbing!
Customer in Greater London Posted on 25/03/2020 , work completed 04/12/2019
RMT Plumbing
Customer Service
Quality
Value
Kitchen, boiler, central heating, washing machine and cooker A big job well done Very professional Thank you R M T Plumbing
Customer in Greater London Posted on 11/01/2019 , work completed 01/12/2018
Recommended
Excellent Workmanship
Customer Service
Quality
Value
Highly recommend this company: excellent work ethic, fantastic job done and good value for money. Very good communication throughout; polite and friendly. A very happy customer!
SabaAli Posted on 13/07/2015 , work completed 13/07/2015
Recommended
Polite trader
Customer Service
Quality
Value
Roy King fitted a new boiler for me almost a year ago. I found that he was good value for money and reliable.
SMerry Posted on 12/12/2014 , work completed 12/12/2014
Recommended
New Boiler
Customer Service
Quality
Value
Roy came to fit our new boiler 11 months ago.He was a Good price, installed to excellent standard , cleaned up after himself , and punctual. What else could you ask for
Peter, Surrey Posted on 17/11/2013 , work completed 17/11/2013
Recommended
Which? Trusted Traders