February 2020’s Which? Trusted Trader of the Month is Lords Roofing

The Derbyshire-based roofing firm scoops the title for the second time.

What's the worst time of year for your roof to need repairing? Try Christmas. Not only is it cold and wet, but you're likely to be short of cash.

So our latest Trader of the Month decided to spread some festive cheer by giving away free roof repairs for two days before Christmas. In return, customers were asked to donate what they could afford to charity.

It’s the second year in a row that Lords Roofing has run the scheme, and company owner Liam Anderson was delighted to smash last year’s fundraising total of £600.

This time, the company raised £925, split between a hospice in north Derbyshire and a local dementia-support scheme.

Do you think your company has what it takes to win? Read our guide on how to be the next Which? Trusted Trader of the Month. 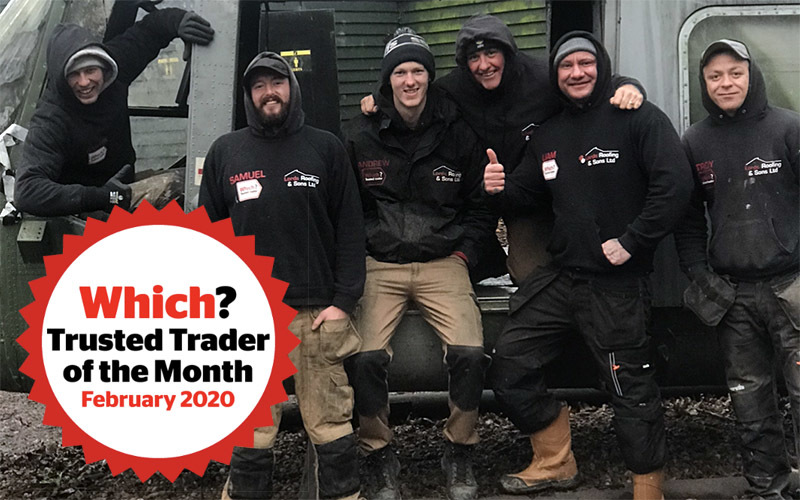 Liam said: ‘I wanted to do it for people who might be worried about paying for a roof repair over Christmas. Instead, they could buy something for their little ones and make Christmas special.

‘One person said it meant they could spend the money on a stairlift instead, and stay in their home for longer.’

The team have also been fundraising for an outdoor play area for a sick youngster, sponsoring local children’s football’s teams, and attending training to help them work with customers who have dementia.

Our judges were impressed by Lords Roofing’s charity efforts and support for the local community, as well as its glowing reviews.

Recent customers have repeatedly described the team as ‘polite’, ‘trustworthy’ and ‘conscientious’ in the reviews on their Trusted Traders profile.

Liam said: ‘My motto is to always deliver what we promise, give 110% attention to detail and never walk down the ladder asking for more money.’

Search for reputable roofers in your area who have been through our assessment and background checks.

It’s the second time that Lords Roofing has won a Trader of the Month title, after joining Trusted Traders only three years ago.

Liam said: ‘When you’re a little company in the middle of the countryside, it really helps to have the Trusted Traders logo. It really means a lot to win Trader of the Month again.’

He signed up to the scheme shortly after setting up his own business, and said it’s been a very positive experience.

‘I’ve tried a few schemes, and Which? Trusted Traders is the best one I’ve used,’ Liam told us. ‘Everyone I speak to is so nice. They can’t do enough for you. It’s not just about taking your money. Trusted Traders has never let me down.’

Congratulations to Lords Roofing for winning February 2020’s Trusted Trader of the Month.