We are a true family business since 1973, specialising in bespoke fitted bedrooms, sliding wardrobes and home studies.

All our furniture is made-to-measure at our factory showroom in Denton, so not only are you buying a completely bespoke, quality product, you are also supporting your local, independent business.

We don’t employ salespeople on commission, and most home design visits are completed by James, co-owner of Crown Bedrooms. There is no pressure selling - just great design with good advice!

All our fitters are employed by us, and have been trained in-house, ensuring a consistent and quality job – we never use subcontractors.

We thrive on customer recommendations and repeat business, and our customer service and product quality is second to none. Please read our reviews.

Visit our showrooms in Denton or Cheadle Hulme to see our gorgeous range of colours, design ideas and storage solutions.

We offer free home design visits - Just give us a call! 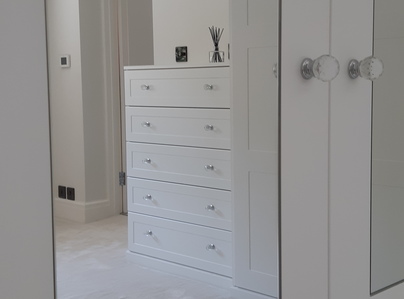