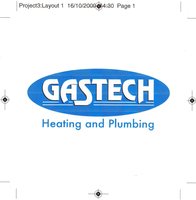 'Gastech' is a family run business Established in 1984.

'Gastech' is committed to providing first class customer care with the use of quality products and also providing excellent workmanship.

'Gastech' is proud to be an approved "Worcester Bosch Accredited Installer" with professionals who can offer:

. Friendly help and advice for your specific needs
. Free no obligation Quotes
. Extended guaranteed of up to 10 Years
. Peace of mind with Gas Safe and OFTEC Registation
. Notify Gas Safe/OFTEC and Building Control and issue all required certification
. Will always be courteous, professional and polite.

Assuring you of our best attention, at all times.