At IN’n’OUT we do things differently, which sets us apart from the competition:
CLARITY - Our prices are fixed, so what you see is what you pay. The driving seat is always yours
CONVENIENCE - Services are all while-u-wait and most carried out in less than an hour, so you will never be without your vehicle for long
CUSTOMER SERVICE - With the friendliest staff, we wont baffle you with jargon but we will only ever use quality parts and products
CLEAN & COMFORTABLE - Enjoy Free Coffee, Free Wi-Fi and the latest magazines or simply watch us look after your car through the viewing window
COMMITMENT - 100% customer satisfaction is our priority, we'll make sure of it

IN'n'OUT is a refreshingly different approach to car MOT & Servicing. With centres across the UK, you can experience car servicing the way its should be...just book your slot today! 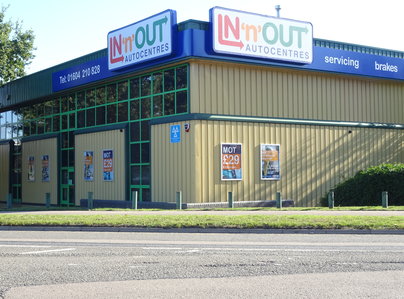