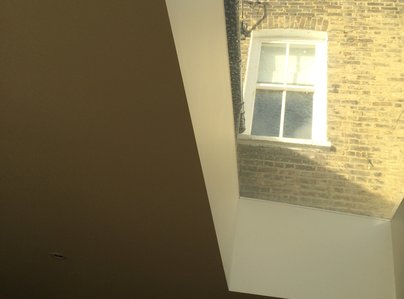 by 89% of customers
Sort by
Roof and pointing
Customer Service
Quality
Value
Very professional and considerate - very happy with the quality of work and those employed to carry it out. Highly recommendable
Customer in Greater London Posted on 11/02/2019 , work completed 18/12/2018
Recommended
High quality work and reliable builder
Customer Service
Quality
Value
Michael and his team have completely renovated our house including an extension in the back of the house, raising the roof, replacing the old garden, repositioning and installing a new kitchen, building a new wc on the ground floor, putting in two new fireplaces, replacing wooden floor, putting in new boiler and heating system, and removing two chimneys in two bedrooms, all according to the architectural plan. The work was completed to a very high standard. Michael is very friendly and very reliable - always provides his honest opinion. Some builders disappear after the work is done, but Michael is always there. There was a time when there was a leaking pipe problem, we called a plumber for emergency call-out and he suggested to break the floor and the antique floor tiles. We then called Michael who came with his son immediately and fixed the pipe without damaging the floor and the tiles, which showed how knowledgable he was in comparison to the other builder. We highly recommend him.
Customer in Greater London Posted on 09/02/2019 , work completed 31/05/2013
Recommended
Highly Recommended
Customer Service
Quality
Value
Michael and his team helped refurbish my 3-storey Neo-Georgian house and created an open plan layout for the kitchen. This involved the installation of 9 beams as specified in the construction drawings. The team also skimmed and painted the house all to a very high standard. trades even told me that this work was a high standard! I am very pleased with the end result and I enjoyed working with the team.
Jennifer Posted on 29/04/2018 , work completed 29/04/2018
Recommended
A very nice and competent builder
Customer Service
Quality
Value
Michael responded quickly to my initial enquiry, coming to see and discuss the work required within a day or so and providing a quotation the next day. There were two jobs required - repairing the floorboards and extending the joists under a bay window, and installing a new Velux window in the loft room. The latter involved the erection of a scaffold tower to give access to the roof. Apart from a small delay due to his scaffolders having to go away at short notice, all the work was done promptly and on time. The different tradesman were all considerate and polite. The standard of work was excellent, and we were very pleased with the outcomes. Throughout the process, Michael maintained good communication with us and visited most days. Overall he was attentive, flexible and reliable. His invoice at the end was the same as the original quotation. We will certainly use him again if necessary and would recommend him to others.
Patrick Christie Posted on 22/09/2017 , work completed 22/09/2017
Recommended
Great work
Customer Service
Quality
Value
Michael and his son Niall responded very quickly when my landing ceiling collapsed. They completed a great job and worked all day Saturday to finish the work. I warmly recommend this building firm.
Dormandy Posted on 20/08/2017 , work completed 20/08/2017
Recommended
A knowledgeable builder with a good team of tradesmen. Quality work.
Customer Service
Quality
Value
Michael is a very experienced builder whose work was of very good quality. Michael completely renovated a bathroom, kitchen, dining room and conservatory. His work was of good quality, and at a reasonable price. After the work was completed there were a couple of small snagging jobs and he was very responsive. Happy to recommend him and we'd use him again.
roger Posted on 16/04/2017 , work completed 16/04/2017
Recommended
Kitchen Refurbishment
Customer Service
Quality
Value
Michael Collins completely refurbished the kitchen in our 3-bedroomed mid-terraced Victorian house several years ago, and it still looks great. This involved removing a load-bearing wall & a chimney breast, and putting in supporting beams. The builders also created a patio door opening, and turned an existing door into a window. They installed an IKEA purchased kitchen, and decorated everything. They also laid a patio. The service was friendly, efficient and focused, and Michael Collins was very open to our suggestions and wishes. The job took about 9 weeks. We've since called on Michael Collins for a number of smaller jobs, and we'd definitely use him again.
Which? Trusted Traders Consumer Posted on 04/11/2014 , work completed 04/11/2014
Recommended
Kitchen refurbishment
Customer Service
Quality
Value
Michael and his team worked on our kitchen a few years back. This involved replacing an old window with wooden french doors to the garden, removing and replacing rotten floor joists and supports, replastering, installing new kitchen units, putting down a new tiled floor and replacing the old ceiling. We're very happy with the end result and would use them again
LesleyN193DF Posted on 30/10/2014 , work completed 30/10/2014
Recommended
Recommended
Customer Service
Quality
Value
Michael and his colleagues fitted a new kitchen for us, layed the floor, installed a damp proof course, rebuilt one wall, plastered it and put a door and window in. He went to great pains to get everything right and always stayed until we were happy with it. Always punctual and courteous, he made valuable suggestions when we were unsure of how to proceed and nothing was too much trouble for him. He also fixed little problems in other rooms when we requested it. I would recommend Michael to anyone looking for a good, honest, competent builder. In fact he impressed us so much that we're getting him back to lay our front garden path and install paving, a gate and a fence
dazzer20thcentury Posted on 30/10/2014 , work completed 30/10/2014
Recommended
Which? Trusted Traders