If your conservatory is too cold in the winter, too warm in the summer and too noisy when it rains then we can help you solve these problems by replacing your old conservatory polycarbonate roof with a more thermally efficient in fact our replacement conservatory roofs achieve an incredible u-value of 0.18 which is below building regulation requirements.

Our skilled tradesman build you a bespoke timber framed roof, and add two separate layers of insulation, the light weight slate or tiled effect roof is available in a range of colours to match your existing house roof. The inside of your new roof is fitted with insulated plasterboard giving you 3 layers of insulation, the internal plasterboard is then skimmed to a beautiful finish, before finally we will fit your internal lighting.

You will then have a beautiful room that you can now use all year round. 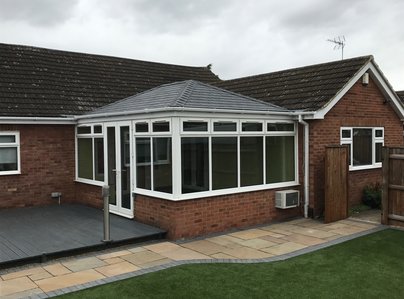