The company was established in 2015. After long years of experience spent in various building projects I've decided to make my dream come true-bringing talented and skilled people together. Since then, the company has grown from strength to strength and successfully completed many projects. We specialize in extension work, loft conversions, and internal refurbishments, from foundations to high-end finish.

Our team with many highly skilled individuals: plumbers, bricklayers, electricians, and carpenters are ready and willing to satisfy our customer's needs. We work to the highest standard and provide professional services as well as deliver all projects in the committed time frame with at most care and consideration for quality. 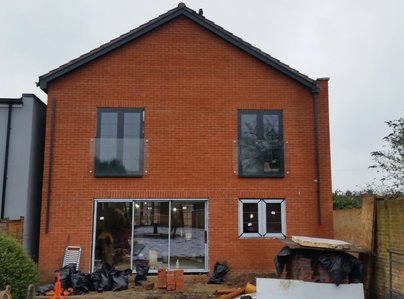 by 100% of customers
Sort by
The Rapid Bees!
Customer Service
Quality
Value
Rapid Bee Ltd
We are in the finishing touches on our 6 month project for a double storey side, back extension, loft conversion, new roof & total renovation with Rapid Bee. We invited a few builders to quote for our job & found RapidBee to be on the money. They certainly were neither the cheapest nor most expensive. We liked them mainly because of their professional approach & the can do attitude & knowledge. Whilst other builders tried to talk us out of some ideas we had, Adam & Saulius were happy to incorporate all our requirements & offered further options to make things better. It is refreshing to speak to a builder who doesn’t complain but offers good updates & offer solutions to problems. They employ an extremely hard working team that show great attention to detail & want to do a good job. The guys dealt with our idiot neighbour professionally & avoided confrontation & Building control on a few matters & Adam provided us solutions before he even told us about the problem. We added a few optional extras along the way & whilst they weren’t cheap we knew they would offer good value for money. They supplied all our windows of a top brand product at a competitive price that look absolutely stunning. They are a few weeks ahead of schedule, an outcome rarely heard of amongst builders. They prepared a clear schedule up front which made it easy to keep track of cash flow on work completed. We actively encourage anyone to get a quote from them & have a conversation with them when comparing qts
Customer in Greater London05/02/2019
Recommended
My review
Customer Service
Quality
Value
Rapid Bee Ltd
We engaged Rapid Bee to build a large rear extension and patio area. We were initially impressed with Adam & Saulius comprehensive quoting process which far exceeded other builders. They were not the cheapest but their professionalism displayed during this process and the feedback from other clients impressed us sufficiently to give them the go ahead. The work started there after on 3rd January 2018 right in the middle of winter There was a team of people on-site 6 days a week (sometimes 7) throughout the build (even when we had a snow on the ground for 5 days)! Rapid Bee didn't take their feet off the accelerator, they had a job to do and planned, managed and focused on getting the job done! Much to our surprise we made last minute changes and requests that were always accommodated which was very much part of the Rapid Bee overall "can do" attitude. The response from foreman Ramunes, or tiler Virgis was always "no problem"! We believe they went "above and beyond" what we had expected of them. For example when needing to move furniture into storage at one point, RB assisted us in moving the furniture to the storage location and back again! We were also very thankful for the suggestions they made, for example, increasing the height of the ceiling in the porch (which was not part of the initial project) which really added value to the end results. The saying "the proof in the pudding is in the eating" absolutely applies with Rapid Bee. Any issue we had (and you will have issues with any project of this nature), we could rely on them responding promptly and resolving. This was a major project for us to live through but was made manageable by the support we had from RB. In summary we could recommend Rapid Bee and would use them again!
Rita, Kent01/01/2018
Recommended
Perfectly executing
Customer Service
Quality
Value
Rapid Bee Ltd
Worked to our plans and helped us iron out any problems, great and efficient team run brilliantly by Adam. The finishes on our kitchen/diner and bathroom are perfect. Exceptional tiling and details. Great price, workmanship and we will be using them again.
Amanda, Essex01/09/2017
Recommended
A builder you can trust
Customer Service
Quality
Value
Rapid Bee Ltd
We had a garden room built at the end of our garden.
Which? Trusted Traders Consumer22/05/2017
Recommended
Good service and quality work.
Customer Service
Quality
Value
Rapid Bee Ltd
I am very happy with the work build they did for me. They build a 2 story side extensions with a pitched roof with storage in it. They were finished ahead of time and pro active during the build. Quality workmanship and good communication through out the whole process. Highly recommended!
Which? Trusted Traders Consumer01/05/2017
Recommended