RDJ Shutters are based in Hertfordshire with a service that spans the country. Specialising in Interior Shutters and Wooden Blinds. We have a large range of shutters to enhance the interior of your home, and we provide a free home survey and quotation service, we also carry sample sets with us so you will be able to choose the shutters you want, at a price you can afford.

Call us anytime for a free no-obligation survey and quotation. Our designers will discuss your requirements, we can also colour match of our range shutters, have a look at the colours available for each range, we can even install our waterproof shutter range in your bathroom and wet room. 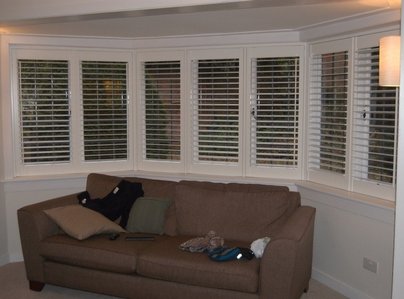 by 100% of customers
Sort by
Excellent customer service
Customer Service
Quality
Value
In March this year Richard fitted some shutters for me and I strongly recommend him. His work is good quality, and the standard is good value for money. He always delivers excellent customer servicce and he is courteous at all times.
MrsAnsell Posted on 14/10/2014 , work completed 14/10/2014
Recommended
Wooden Shutters
Customer Service
Quality
Value
Last week Richard installed some wooden shutters for me. I highly recommend him as he is clean, tidy and reasonably priced. When the work was carried out, he was punctual and professional at all times. Overall and I am very pleased with the results.
Tricia Posted on 14/10/2014 , work completed 14/10/2014
Recommended
Very Organised
Customer Service
Quality
Value
In August 2014 I used Richard at RDJ for fitted plantation shutters and venetian blinds and the service was professional. They are friendly, with great straightforward communication and are very organised. We have recommended the business to friends and family, and can rate them nothing less than 5 stars.
Rachelle Posted on 14/10/2014 , work completed 14/10/2014
Recommended
Which? Local Review
Customer Service
Quality
Value
Richard supplied and fitted shutters to a bay window. He was extremely helpful in explaining all the design options and their pros and cons. He kept all appointments, and was easy to contact. He fitted the shutters very professionally. The shutters are about one-third of the price of top-name branded shutters (eg Sanderson), and to me seem to be of a high quality. Richard explained that one Chinese supplier supplies most independent fitters of shutters such as himself, as well as many cheaper branded shutters. That explains the huge price differentials in the market-place, though I expect that fitting costs are also cheaper for an independent fitter.
CRM Posted on 16/12/2011 , work completed 16/12/2011
Recommended
Which? Local Review
Customer Service
Quality
Value
Have used Richard on two occasions to install shutters. Pleasant and helpful and shutters a reasonable price. He has come back to sort out a minor problem. Higly recommended.
rlmid Posted on 30/10/2011 , work completed 30/10/2011
Recommended
Which? Trusted Traders