Trees benefit from regular care to ensure they remain healthy and safe. Neglected trees can be dangerous. Trees with dead, diseased, over-extended or defective branches often break and fall. Damaged trees or trees with dense crowns or shallow roots can blow over in high winds and cause serious damage. Trees often become too big and need to be reduced. They grow limbs that hang down over roads and driveways.

Our polite and friendly staff are trained to NPTC standard and are fully insured. We use modern and efficient low-emission chainsaws and environmentally friendly biodegradable chainsaw oil. All waste is recycled, branches are chipped and the woodchip is then distributed to allotments, schools and wildlife gardening centres around the city. Logs get split and dried for firewood - nothing is wasted. Sites are always left clean and tidy. Providing first class service and starting long-term working relationships are our main objectives.

If you need a tree surgeon give us a call. We’re ever so friendly. 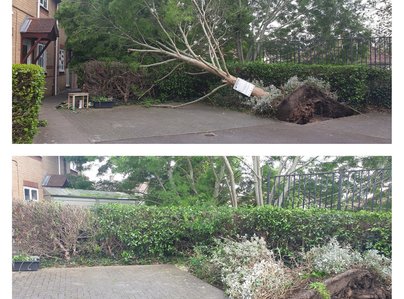