S and A Heating Ltd are an experienced trusted business based in Torquay, providing high quality plumbing, bathroom and central heating services. Trading since 1977 we have over 42 years experience in the plumbing/ heating industry.
We are based in Torquay where we have an excellent reputation as a local trusted and reliable company and we also work all over the South West
Our professional team of gas engineers are polite, clean, trustworthy, willing to help and most importantly are able to cater for all your domestic requirements in a time frame to suit you.
We are Gas Safe, OFTEC and NAPIT registered, a member of IDHE, CHIL, a registered Energy Efficiency installer and Green deal installers.
Winners of the installer of the month (June) with Worcester Environment 2010 Awards for Excellence.
In February 2018 (aired on BBC1 in May 2019) we took part in the DIY SOS Big Build in Torquay donating our skill and expertise in installing the plumbing and heating in the home for an amazing cause. 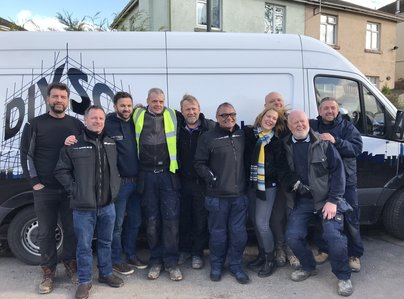 by 100% of customers
Sort by
Very professional and trustworthy.
Customer Service
Quality
Value
From the moment I met Sean the surveyor from S&A heating I knew I was in safe hands. He was polite and very professional. He was very informative regarding my new boiler and answered all of my questions and followed all COVID regulations whilst inside my home. My boiler was fitted a lot quicker than I expected because of a cancellation and I was so grateful when Sean phoned to tell me it would be fitted before Christmas instead of the New Year. The engineer who fitted the new boiler arrived on time and worked continuously through the day to get my old boiler out and the new one in. Once the job was completed he explained all the functions to me thoroughly and also went through all the paperwork. He was very knowledgeable and professional and cleaned up everything before he left. Because of COVID he made sure he was very careful and followed all regulations whilst inside my house when testing my radiators. I would not have any hesitation in recommending S&A Heating to anyone that needed a new boiler.
Donna in Plymouth Posted on 03/01/2021 , work completed 22/12/2020
Recommended
Boiler replaced
Customer Service
Quality
Value
The young man who installed my new boiler was brilliant, he worked very efficiently he was very tidy he was very informative explained everything I could not have a better person here to do the job Thank you
Customer in Plymouth Posted on 16/12/2020 , work completed 15/12/2020
Recommended
Installation of my lovely new boiler.
Customer Service
Quality
Value
Your engineer arrived on time explained everything he had to including the removal of my old dinosaur boiler. Everything was explained with the paper work and how easy it was to use the on off button , much with my poor sight.
Customer in Plymouth Posted on 14/11/2020 , work completed 10/11/2020
Recommended
Diligent and insensitive engineer
Customer Service
Quality
Value
I was so impressed with S & A heating from start to finish, on time, extremely hard working and very clean and tidy, laying out dust sheets extensively and wearing shoe covers in the house. Really appreciated that James spent time and patience explaining how to use boiler remote device. Lovely guy and would thoroughly recommend the firm.
Customer in Torbay Posted on 28/10/2020 , work completed 26/10/2020
Recommended
Boiler Supply and Installation
Customer Service
Quality
Value
They carried out a high quality installation on time and with a "no problems approach". All staff were co-operative, helpful and responded promptly to my communications.
Customer in Torbay Posted on 03/07/2020 , work completed 30/06/2020
Recommended
Fast, Efficient,
Customer Service
Quality
Value
Our 23 year old 400 series combi boiler was condemned as un-repairable on Wed 4th July by the service engineer. we called S&A heating for a quote. Thurs 5th July Sean the surveyor visited in the morning and emailed a quote the same day in the afternoon. We accepted the quote by phone and were given a installation date of Tues 9th July. On the morning of Tues 9th Richard the installation engineer arrived at 8.30am. His first job was to prepare his working area around the boiler with protective dust sheets. That done he worked continuously taking out the old boiler, and replacing it with a new one, Richard is not a 9 to 5 man and by 7pm the system was completed and working, Richard explained all the functions, filled in the paperwork and we signed off the installation. Richard removed all the old parts cleaned the area thoroughly before leaving the house. Because the new boiler was physically the same size only its new appearance showed that the work had been done! otherwise everything was left exactly how it was before the work began. We were only six days without hot water and two of those were a weekend!! which was very little inconvenience thanks to S&A Heating Ltd. My impressions are, excellent company, excellent staff with an exceptional engineer. I would not hesitate in recommending them.
Customer in Torbay Posted on 16/07/2019 , work completed 09/07/2019
Recommended
Trustworthy and honest
We use S&A Heating to look after our rental properties in Torbay and find them trustworthy and reliable, I would recommend this company to all my friends and family.
John Posted on 18/06/2019 (Reviewer did not use service)
Recommended
Excellent service
Customer Service
Quality
Value
Very pleased with service and work received from S&A Heating.
Irene, Devon Posted on 20/05/2019 , work completed 20/05/2019
Recommended
New Boiler
Customer Service
Quality
Value
Highly recommend Sean and his team. Clean, tidy, efficient, good communications, friendly, knowledgable and experienced.
Customer in Devon Posted on 15/05/2019 , work completed 01/05/2019
Recommended
Very efficient.
Customer Service
Quality
Value
From the initial visit by the company to the completion of the work we received an excellent service. They knew exactly what we needed & completed the job in the time frame.
Alan, Devon Posted on 15/04/2019 , work completed 15/04/2019
Recommended
Which? Trusted Traders