Sustain Heating and Renewables are an independent heating and renewables installer serving the South and South West. We have over 20 years experience working within the industry and when Sustain was set up we had one clear Ethos:

Everything we do is Customer Focused.

From taking your enquiry, through fitting your system you will receive a personal service from us. We aim to deliver a five-star service as standard. To deliver a consistent level of service our staff share in the same company ethos. Everyone has a keen interest in delivering the best service possible and we have built a team that goes that extra mile every day.

As we are an independent company, we are not tied to any one product. This means we can research the market and always recommend the best product for your requirements. Every system is bespoke doing the job right means you get a successful install with the comfort of a 10 year independent workmanship warranty. 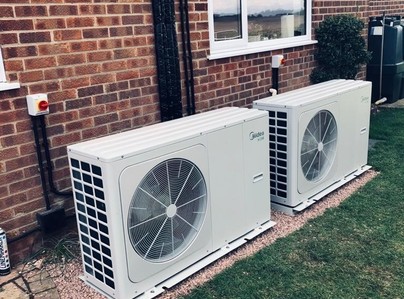 by 100% of customers
Sort by
Efficient service
Customer Service
Quality
Value
Installation of air source heat pump, removal of old oil fired boiler, changing many radiators for bigger ones and installation of 2 new ones, moving hot water tank and reconfiguring system to work better, refit solar thermal with improved pump and software
Which? Trusted Traders Consumer Posted on 04/03/2021 , work completed 14/01/2021
Recommended
Endorsement Reference - Sustain Heating & Renewables - thoroughly recommended!
Customer Service
Quality
Value
Sustain Heating & Renewables installed our air source heat pump and thermal solar water heating during January 2021. They were one of a number of local firms that we considered and came across as professional, competent and rigorous in their approach to service delivery and customer satisfaction. I am delighted with the system that they installed, and would have no hesitation in recommending them to future customers.
Which? Trusted Traders Consumer Posted on 04/03/2021 , work completed 19/01/2021
Recommended
Endorsement Reference - Excellent work
Customer Service
Quality
Value
Sustain Heating and Renewables quoted for an air sourced heat pump installation in our 4 bedroomed house to replace an aged oil fired wet central heating system. The company provided a competitive quote, not the cheapest and not the most expensive. Included in the quote were 6 replacement radiators, needed to work with the lower water temperature which air sourced heat pumps produce, After the heat loss surveys were complete we added, by mutual agreement, 2 further radiators and a shower pump. The initial contact, surveys and final quotation were all carried out in a professional and satisfactory manner, giving confidence in the company. Work started on the day promised and was completed within the 5 days promised with minimal disruption. Fan heaters were supplied to keep the house warm during the work. The plumbing and electrics were completed to a high standard and the workplace was kept clean and tidy. The system has worked well keeping the house at a comfortable temperature even during very cold weather. A fault developed in the LG heat pump last autumn and the company immediately sent an engineer to identify the problem. A PCB had failed and a new and improved one was sourced from LG under the warrantee and fitted within 48 hours. Overall the heat pump has proved very satisfactory and reduced the heating bills about as predicted, even though we run the house at 22 deg C rather than 20-21 deg.
Which? Trusted Traders Consumer Posted on 04/03/2021 , work completed 16/01/2020
Recommended
Endorsement Reference - recommending an air-source heat pump
Customer Service
Quality
Value
I found Sustain on the Green Match website. They visited my house and gave a very thorough assessment and quote. I was given a 'scope' document which outlined accurately what the job entailed. I was given the dates that the work would be done. The new parts for the air-source heat pump arrived exactly on time and the work started and finished on the dates agree on. After the work was completed I was given a detailed tour of how it all worked. They had a problem getting the right pipe cladding because of the lock down, but once they had it they came back and replaced the lower quality one for the proper cladding. I was concerned at the noisy water pump and they came back and corrected that. I was then given and electrical installation certificate and a hies energy performance certificate and a NICEIC certificate of compliance. I also got an installation logbook which includes a warranty certificate and an insurance backed guarantee for 10 years. The installation staff were very friendly and efficient. The system has now worked very effectively for 7 months, keeping the house warm throughout the winter months.
Which? Trusted Traders Consumer Posted on 04/03/2021 , work completed 24/07/2020
Recommended
Endorsement Reference - Great Customer Service
Customer Service
Quality
Value
Removal of 2 existing oil boilers and replacement with an Air Source Heat Pump installation. Including new hot water cylinder, new radiators throughout the property and new pipework to connect the 2 old separate heating systems to the new heat pump. The work was done on time but commissioning was delayed by a leak on the old plumbing system. The leak was fixed promptly, without any additional cost to myself. Since installation there have been a couple of minor issues which were fixed with hesitation and without additional cost. Throughout the work communication has been excellent.
Which? Trusted Traders Consumer Posted on 04/03/2021 , work completed 20/08/2020
Recommended
Endorsement Reference - Excellent service
Customer Service
Quality
Value
Sustain fitted an air source heat pump for us. They were very knowledgeable and helpful, always available if we had any questions and the work ( which was a huge job as we were replacing storage heaters and had no pipes) was completed super fast, to schedule all with in a week. Planning to use them again due future work.
Which? Trusted Traders Consumer Posted on 04/03/2021 , work completed 20/12/2020
Recommended
Endorsement Reference - Great Heat pump installer
Customer Service
Quality
Value
Installation of a Valliant Air Source Heat pump at my house. The work was done professionally and systematically and met all expectations. I would have no hesitation in recommending Sustain.
Which? Trusted Traders Consumer Posted on 04/03/2021 , work completed 30/08/2020
Recommended
Which? Trusted Traders