Based at the Conservatory Village in Little Paxton, near St Neots, Cambridgeshire The Kitchen Magician is a well-established kitchen and bathroom specialist.

We have over 1500 doors in vinyl and timber to choose from in our ranges alone. We can also colour code the plinths, cornice and light pelmets. Changing just the doors can be a dramatic way of changing your whole kitchen look and can be a fraction of the price of a full kitchen.

We can supply ovens, hobs hoods for Neff and Bosch Our kitchens are of the highest quality which shows through in the design. All base units are 18mm thick all round with the wall units being 18mm with a 9mm backing. All interiors are colour coded to match you doors which we feel is a great finishing touch. New technology is available and this shows in our extensive range of accessories including baskets and wire work.

Some of the full kitchens are available to us in as little time as 4 days If you need further details please visit our website. 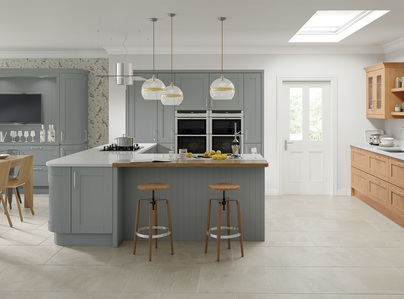