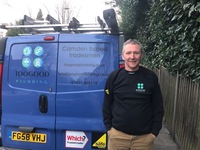 My name is Martin Toogood and I am currently a sole trader plumber based in the Camden area. I have years of experience working in peoples homes, fixing leaks, installing boilers, and all other types of plumbing fixtures.

I am also familiar with the needs of small to medium businesses, such shops, hotels and restaurants. My reputation has been developed through hard work, reliability and a can do attitude