Welcome to White Rock Property Care. We are a family run Company, at the forefront of the Property Care industry within South Wales. Based at our Head Office in Swansea, it is here you will find our friendly team of experts ready to help.
With a wealth of experience within the industry, we are privileged to offer our market leading services to both domestic and commercial clients throughout South & West Wales, from Pembroke to Monmouthshire.

At White Rock Property Care, we believe in delivering a service of the up most quality. As such, we ensure that all staff, from our surveyors to our onsite technicians are properly trained and carry the appropriate accreditations.

We take a great deal of pride in the work we have provided in our numerous years of trading, building a trusted brand, recognisable throughout South & West Wales. Customer satisfaction is key to our service and we happily display reviews from our clients and generate new clients from referrals. 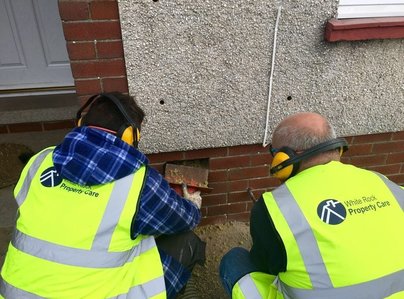 by 98% of customers
White Rock 2016
Customer Service
Quality
Value
When they first came they were efficient and gave us an estimate which was very clear about what was needed. As they worked they picked up other problems which needed to be done and explained everything to us. Little problems were sorted out fairly quickly. The coordinator was excellent and dealt with our concerns very patiently, quite often sorting things that other workmen should have done, e.g. carpentry. The place was always left tidy at the end of the day. All rubble was removed each day. We employed an independent painter and decorator to sand down surfaces and tidy seals on windows and generally finish off afterwards as that was not in the contract. The worst thing was that by mistake they scratched the windows when finishing and washing windows from outside. A mistake I appreciate, but annoying and frustrating just the same. They are in the process of replacing the panes and we have agreed to share the cost. But It is being sorted politely and honourably. One rather nice touch was that when the coordinator climbed up to check the roof he found a nest full of baby birds. He refused to do any work until they had flown!
Which? Trusted Traders Consumer Posted on 30/09/2016 , work completed 30/09/2016
Recommended
Thank you very much for your review. We appreciate all feedback we receive and will use them to improve the service we provide to our customers in the future. We're glad that overall, you were satisfied with our services & that the baby birds flew away safe and sound.
Which? Trusted Traders