MAIN PRODUCT/SERVICE -
Conservatory Roof Insulation Ltd. Install an insulation system to the inside of your existing conservatory ceiling, without the need to change the roof. We were the original company back in 2009 to offer this product in the UK, previously working with the inventor of the concept. Because of this, our product has been carefully created and approved with the help and guidance of the original inventor. The fully insulated roof design achieves U-values as low as approx. 0.17 - roughly 10 times more efficient than an A-rated Window, reducing your energy bills. In fact we're so confident of our product quality that we give all our customers a 10 year guarantee as standard.
We also make sure to charge only truly affordable prices- so much so that our product costs almost half the price of ceiling blinds, and more than 60% of our customers paid less than £1800! (Price varies depending on size and roof type)
We don't employ Salesman, so no heavy pressure and no salesman's commission. 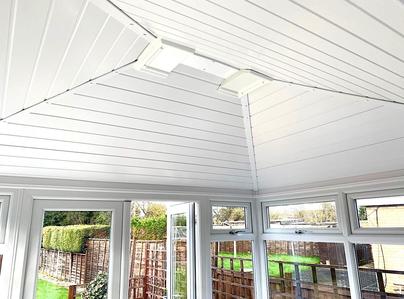 by 100% of customers
Sort by
Recommended.
Customer Service
Quality
Value
Efficient, timely and professional workmanship. Communication was good throughout and the price was reasonable. I would recommend to my friends.
Anne, Derbyshire Posted on 08/07/2017 , work completed 08/07/2017
Recommended
Very highly recommended to anybody!
Customer Service
Quality
Value
We had our conservatory roof lined and insulated. We originally found them on the internet along with several other companies. We rang several others and even though Conservatory Roof Insulation Ltd were a million miles from us, they came down and even offered us a discount as we worked our dates around their workmen being in the area. Julian, the director was fantastically helpful, easy to talk to and very honest. The best part was when was the after care service, they have called to make sure everything is still ok and make sure we've not had any problems. Very highly recommended to anybody!
Which? Trusted Traders Consumer Posted on 03/07/2017 , work completed 03/07/2017
Recommended
Very professional
Customer Service
Quality
Value
As weather was continual rain they did a excellent job.
Dorothy, Lancashire Posted on 22/06/2017 , work completed 22/06/2017
Recommended
Wholeheartedly Recommended
Customer Service
Quality
Value
We had our conservatory insulated in April and are very pleased with the results. When doing the site survey they discovered a small leak in it's roof and this was fixed during the installation which we are very great-full for. The fitters were very good and worked extremely hard.
Which? Trusted Traders Consumer Posted on 27/04/2017 , work completed 27/04/2017
Recommended
Very happy with our conservatory.
Customer Service
Quality
Value
We had our conservatory insulated around 2 months ago and are very pleased with the results. It is so much more usable now, cool in the day and warm in the evenings. The customer service we received was excellent, communication was very good and we were kept up to date so we know exactly what was happening and when. The installation team worked very hard and even stayed late to get everything completed in one day.
Which? Trusted Traders Consumer Posted on 12/04/2017 , work completed 12/04/2017
Recommended
Very happy
Customer Service
Quality
Value
We had our conservatory ceiling insulated. The service was very good from start to finish. Quick, courteous, professional and importantly explained everything as they went a long. We are very happy with the results.
Which? Trusted Traders Consumer Posted on 12/04/2017 , work completed 12/04/2017
Recommended
Would not recommend
Customer Service
Quality
Value
Customer Service: CRI given 3 opportunities to fix their mistakes, but they were unable to do so. We arranged to have an independent builder estimate the cost of the necessary repairs and to have him carry out the job. CRI agreed to pay the estimate of £1800. As tiles were removed further problems were uncovered resulting in the total cost increasing to £5000. Despite being presented with evidence of the scale of work which was necessary due to the incompetence of CRI we received only the initially agreed £1800. Legally correct. Quality: Faults on job- • Lack of eaves tiles • Incorrect tile overlap • Insufficient leading • Pitch of roof • Felt in guttering • Guttering running the wrong way • Over fill of skip • Garden left in dangerous state • Tapco (tile manufacturers) also raised concerns about the work carried out by CRI stating, “this is unacceptable and invalidates the warranty [of Tapco tiles]” and regarding the lack of eaves tiles “obviously the roofer did not know what he was doing”. Value: •Initially quoted £2000 to insulate our roof. Re-quoted £10,000 once work had begun. •Arranged discounted price (£8000 due to hassle caused) to tile and insulate the whole conservatory roof. CRI offered us a payment plan. •Total cost £13,000 (£8k initial work, £5k remedial work) offered compensation of £1800 to fix errors •This job has now cost us a total of £11,200. It was initially quoted as £2000. Don’t make our mistake.
Customer in Lancashire Posted on 23/03/2017 , work completed 18/12/2018
You originally purchased our interior insulated ceiling system for £1,900. On survey, structural roof issues were found, so the interior system could not be installed. So as a favour we sub-contracted a tiled roof replacement company for you, their Quote was £7000 you agreed to this installation. We didn't increase the price as you falsely stated. 6 months later you had only paid 5 instalments? You said you weren't going to pay the £1,000 balance because you had a builder friend visiting your home at the time and commented that he would have installed differently? even though he admitted he had never installed a lightweight conservatory roof replacement system before? He put sufficient doubt in your mind though? You then informed us that you wanted our roof system changed to your friends design and you wanted us to pay for it to be done? We informed you that there was nothing wrong with the roof system we had installed. We sent our surveyor and he confirmed this. As a good will gesture, we agreed to pay his estimate of £2,000 once we had seen photographic evidence of his changes. We heard nothing back for months and presumed you had decided not to make the changes your builder had suggested? Then out of the blue your builder rang us saying his bill had now increased to £6,000 ? We eventually received photos but observed that all the changes hadn't been made as agreed on his original estimate. We did reluctantly pay his original bill. We no longer install tiled roofs.
Which? Trusted Traders