Continental Fireplaces is a family run business. We can provide warmth, atmosphere and a focal point in your home.

Our services include supply and fitting of gas, electric, solid fuel or Biomass appliances, with the latest innovations in convenience, efficiency and style.

You can visit our showroom to see some of the fires and fireplaces to get a real feel for what would look right in your home.

With more than 20 years of experience in the fireplace industry we have a small team of professional and experienced sales and installation staff, ready to offer you honest advice. This could be in our showroom or with a survey in your own home We look to help you choose the correct appliance for you.

Please visit our website for more information about us and then call in or call us to find out more. 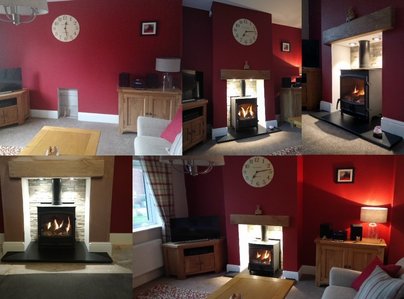 by 100% of customers
Sort by
Excellent service
Customer Service
Quality
Value
Everything from the initial enquiry to the actual installation went like clockwork. No enquiry or query went unanswered. Times and dates were all fulfilled and the office staff and fitters were a pleasure to deal with. 5 star service! Well done.
Debbie, Shropshire Posted on 25/02/2019 , work completed 25/02/2019
Recommended
What can I say
Customer Service
Quality
Value
We needed to have a LPG fire fitted in the lounge of our new build property and approached a couple of companies for advice and quotations. This company was by far the more professional and was up front with the pros and cons. From entering the shop premises right to the fitting we found the staff had full knowledge of the products displayed and of the product that was chosen, the advice was first class. The fitting completed in half a day and the lounge was left neat and tidy. All in all we made a good choice to use this company.
Customer in Herefordshire Posted on 28/01/2019 , work completed 25/01/2019
Recommended
Outstanding Service and Friendly People
Customer Service
Quality
Value
Quite simply a pleasure to work with such knowledgeable, reliable and friendly people. We wanted to replace an oil fired Aga-type cooker with an electric version and add a small wood-burning stove into our kitchen. In the showroom we received excellent advice and guidance on the options to consider. We received a site visit to check the recommendation and plan for installation. We are delighted with our choices and with how the work has been undertaken. Continental Fireplaces were always on time; they dealt creatively and positively with a number of challenges (our house is very old); and they were unfailingly clean, tidy, considerate and friendly. The administrative and after-sales care we have received has been faultless and we really feel we were treated as individuals, where everyone knew the job and what we were doing. I simply could not recommend them more highly Dan W
Customer in Shropshire Posted on 11/01/2019 , work completed 18/12/2018
Recommended
Knowledgeable, experienced and delivering what they promise
Customer Service
Quality
Value
From the initial phone call through to completion, Continental Fireplaces were brilliant. They did an initial site visit and talked me through my options and how the installation would go. They arrived on time and the work was done to schedule with minimum mess. Quite simply, knowledgeable, experienced and lovely people - and I'm totally wrapped with my new wood burner.
wadders Posted on 13/10/2018 , work completed 13/10/2018
Recommended
First class service all the way.
Customer Service
Quality
Value
We had an established log burner that was causing plasterwork to crack. The burner needed to be removed, the flue checked, and a piece of fire board inserted. That necessitated the established plasterwork being cut back, the board inserted, and re-plastering to make good. Finally, the burner had to be-seated and tested.
DXmas, . Posted on 12/04/2018 , work completed 12/04/2018
Recommended
Highly recommended
Customer Service
Quality
Value
Continental Fireplaces installed a woodburner in my home, from the initial visit by Jeremy, to the installation by Jonathan and Matt I was impressed with the friendly, efficient service provided by this company. All the work was carried out quickly and without undue mess, keeping the disruption to a minimum.
Jane G, . Posted on 10/04/2018 , work completed 10/04/2018
Recommended
Woodburner installation
Customer Service
Quality
Value
we had installed a Chesney Beaumont 8 Woodburner and found Continental Fireplaces to be efficient, fair and professional.
Peter A, . Posted on 21/03/2018 , work completed 21/03/2018
Recommended
Get the Heat Get Continental Fires
Customer Service
Quality
Value
We had our conservatory taken down and permanent extension built,we wanted some special heating in this room and to make a nice feature We visited Continental Fireplaces from Church Stretton Shropshire, the first meeting with there staff was very professional and competent in the products they were selling, The second meeting we had was when one of Continental Fires salesman came to our home to do a survey and explain very comprehensively what we would require,After that meeting we received a full report and breakdown of costs and a building schedule for the forthcoming project, Work was started on the day and and the time that they stated and completion of the installation was also completed at the time and day that was stated, The workmanship and politeness of all the staff at Continental Fires we would have no hesitation to recommend them as a company
Mr Smith, Which? Consumer Posted on 20/12/2017 , work completed 20/12/2017
Recommended
Which? Trusted Traders