Movers Transport have been trading since 1985, and during this time we have progressed from one man and one vehicle offering our clients small local removals and commercial distribution of small loads, to a fully National and International moving company.

We now offer Commercial and Domestic removals, both national and international. As well as storage and specialist distribution and handling services.

We are able to move everything from small single items to large- scale corporate removals, distributing everything from a single pallet to 48 pallet full loads, using our road train vehicles.

We operate from a conveniently situated 26,000 square foot warehouse and office facility in South Manchester. 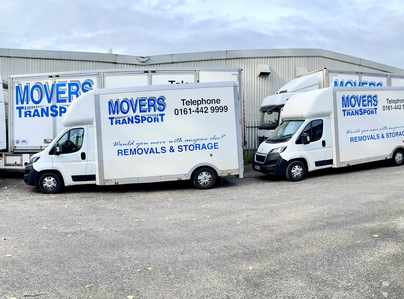 by 100% of customers
Sort by
Great Removal Company!
Customer Service
Quality
Value
We used Movers for the first time in May 2011 after they were recommended to us by a friend who had used them. Our move went smoothly, largely because of Movers who were on time, efficient, competitively priced and incredibly helpful. Nothing was damaged in the move and all of the staff were friendly and tidy. For various reasons we found ourselves moving again in 2012, 2013 and just recently (final move!) in 2014. Each time we immediately contacted Movers due to the positive experience that we had originally had in 2011. Our 3 subsequent moves have all gone smoothly and we have found the service and experience of moving to be consistent each time. We would recommend Movers to anyone in need of removal services.
Joanna Posted on 13/10/2014 , work completed 13/10/2014
Recommended
Excellent Service
Customer Service
Quality
Value
I used Movers transport for my recent house move, as i am sure many of you can relate to, moving home is quite stressful! I decided to use Movers as they were highly recommended by a friend. They couldnt have been more helpful, they provided an excellent service from day 1! From dreading everything about moving house it really was made so easy with Movers! The guys who came to the house were great! i would deffinatley recommend Movers Transport to anyone looking for a proffesional service. Thanks again!
CMR403287619 Posted on 10/10/2014 , work completed 10/10/2014
Recommended
Which? Trusted Traders