Richmnond Park plumbers ltd specialises in all aspects of plumbing and heating.

We offer a fast friendly efficient service in London and the surrounding areas.

All work is guaranteed and we are fully insured. 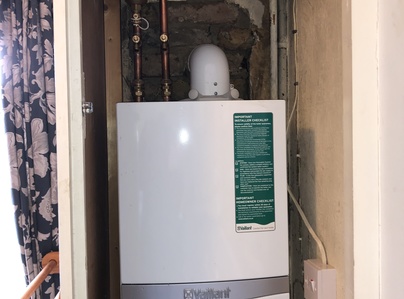 by 97% of customers
Sort by
Boiler and radiator fitting
Customer Service
Quality
Value
I researched having a combi boiler fitted and obtained 5 quotes. I chose this company as they were very thorough and honest with what needed to be done and how. Tim also installed a separate radiator where the old water tank was. Not all went according to plan, as these things often don't, but I always say it's the measure of a company as to how they deal with issues and problems. Unfortunately, they disconnected the house alarm battery by mistake and the alarm went off late on a Friday night. Tim paid for the alarm engineer to visit and resolve. The new radiator didn't work properly and Tim had to attend a couple of times to fix it. It was one of those 'scratching heads' types of things, but he persevered (at his cost) and got it working. All of this happened whilst Covid was hitting himself, his staff and his family so there were inevitable delays, but Tim and Bianca resolved the issues and communicated well. I recommended Tim to install a combi boiler for my neighbour and she was very pleased with the outcome. I would use this company again.
Olga in Greater London Posted on 29/01/2022 , work completed 26/07/2021
Recommended
Boiler installation
Tim did an excellent job installing our new boiler. He was very polite, knowledgeable and hard working. Would recommend.
Customer in Greater London Posted on 30/11/2021 (Reviewer did not use service)
Recommended
Friendly, fast, professional
Customer Service
Quality
Value
I strongly recommend Richmond Park Plumbers. They were fast, friendly, and professional. Don’t have any negative comments :)
Customer in Greater London Posted on 30/11/2021 , work completed 30/11/2021
Recommended
Probably OK if nothing goes wrong, but if it does be warned.
Customer Service
Quality
Value
I have had two big issues with this company. A large water leak soaked our carpet and damaged our curtains. While they were initially willing to compensate us for the damage they did not respond to our phone calls, texts, or emails for a very long time and over 1 year later is not willing to reasonably put this right. Additionally, we just had our first boiler service done only for the Worcester Bosch engineer to tell us that the commissioning checklist had not been completed which is required for the warranty to be valid. Having made an appointment and waited in all day for someone to come and complete the checklist they didn't turn up and I am still waiting for them to tell me when this can be done. I hope this does get sorted, but this is very poor customer care and I would avoid using this company.
Customer in Greater London Posted on 24/07/2021 , work completed 11/04/2020
In March 2020, we replaced your boiler and you asked for some additional work to replace some old radiator valves. When you informed us of a leak, we responded immediately and stopped it. It was not clear what caused the damage, but we agreed we could have potentially spotted the weakness in the old piping. As the cause was not clear, as a gesture of goodwill we had your curtains dry cleaned. The dry cleaning was not satisfactory, so you asked us to replace the curtains. In Nov, you provided a quote from John Lewis for new curtains for £1074. This was for much better quality curtains, made from Malmo hemp fabric with a premium cotton lining, rather than the damaged Viscose curtains. John Lewis offers several types of high-quality lined cotton curtains of similar length for £220 or less, and in April 2021, we made a fair offer of £300. You turned this down and asked for £400. On 22 June 2021, you emailed us regarding the warranty documentation, which Worcester pointed out was outstanding. This was an oversight on our part, and we apologise. We replied on 24 June advising that we were isolating due to Covid and would be in touch when we come out of isolation. We have offered you several dates to resolve this since. On 24 July, you asked if we would consider using an Alternative Dispute Resolution service. We are keen to resolve this, our offer of £300 is still available.
Competent , polite and punctual. Excellent service.
Customer Service
Quality
Value
I had a blocked sink and checked out on my Which Subscription for emergency plumbers in my area. I telephoned first thing Monday morning and someone was here within two hours. Unblocked the sink with minimum fuss and disruption. Will definitely use again and highly recommend.
Customer in Greater London Posted on 21/10/2020 , work completed 19/10/2020
Recommended
It works now
Customer Service
Quality
Value
Well done, hope it lasts if it does excellent.
Antonio, London Posted on 12/02/2018 , work completed 12/02/2018
Recommended
My review
Customer Service
Quality
Value
Very efficient and friendly service.
Peter, London Posted on 08/02/2018 , work completed 08/02/2018
Recommended
Boiler Breakdown
Customer Service
Quality
Value
Very helpful.
Jagjeet, London Posted on 08/02/2018 , work completed 08/02/2018
Recommended
Great Service, Great Engineer
Customer Service
Quality
Value
Fixed boiler and replaced fan, very neat - tidy job, really a pleasant guy.
Chrissie, Surrey Posted on 08/02/2018 , work completed 08/02/2018
Recommended
Very good job
Customer Service
Quality
Value
Engineer attended and quickly replaced the valve of my boiler and completed standard safety checks.
Matteo, London Posted on 06/02/2018 , work completed 06/02/2018
Recommended
Which? Trusted Traders