Thomas Roofing is a family operated business, operating throughout Chester, North Wales, the Welsh Border Country, Cheshire, the Wirral and the entire North West. With over 20 years experience, we at Thomas Roofing take real pride in our work and strive to provide a service that is professional, reliable and delivered on time. 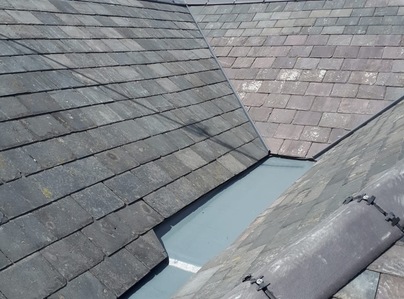 by 100% of customers
Sort by
Once again a great service
Customer Service
Quality
Value
This is 3rd time I have used Thomas Roofing and would highly recommend their services. Arrived on time and the two roofers were very polite and completed the work quickly on my guttering front and back of our house.
Customer in Flintshire Posted on 14/03/2019 , work completed 12/03/2019
Recommended
Great Job!
Customer Service
Quality
Value
Thomas Roofing did a great job replacing our flat garage roof with rubber and at a very reasonable price. The guys were really pleasant and efficient despite the extreme heat (and also the unexpected rain) on the two days they were here, and kept us informed of progress. I would not hesitate to recommend them!
JulieH Posted on 30/07/2018 , work completed 30/07/2018
Recommended
Wouldn't hesitate to recommend them!
Customer Service
Quality
Value
I found a wet patch on my ceiling, and found Thomas Roofing's number on the internet. Within hours of calling they sent someone our to me and they fixed a leak and the tiles it had broken. They also found other problems that i hadn't yet noticed and fixe3d them for me also; then then re-plastered the ceiling for me afterwards. I then got the mout a few months later to fix another problem, which again they came promptly to fix. As my roof was very ld and i was frequently having problems, they suggested i have the whole roof replaced instead to save me some money. They didn't pressurise me into paying and they made sure i knew what was going on the whole way (for example by providing me with pictures of the work they had done on the roof so i knew what was going on). I would not hesitate to recommend them!
Which? Trusted Traders Consumer Posted on 28/06/2016 , work completed 28/06/2016
Recommended
Absolutely brilliant
Customer Service
Quality
Value
Thomas Roofing replaced faciers and guttering in my home. They were very clean and tidy and gave a competitive quote, they did a great job! They were happy to discuss extra requirements had so i had a few more more things done. They were great at comminicating and responding to my calls/texts. They were really friendly and i would absolutely use again!
Jenny, Deeside Posted on 07/05/2016 , work completed 07/05/2016
Recommended
Very good
Customer Service
Quality
Value
Fixed some tiles on the roof for me. Did a really good job, turned up when they said they would, and had a very competitive price. Overall a really good experience.
Which? Trusted Traders Consumer Posted on 18/04/2016 , work completed 18/04/2016
Recommended
Which? Trusted Traders