Bexley & Bromley Roofing are a local business based in Sidcup and have over 15 years experience in the roofing industry. We are dedicated to providing you with the highest quality of work, whether its simply a small repair or a full renovation, call us today and take advantage of our professional services.

All new roofs are guaranteed and we are fully insured. We also offer all of our customers free estimates and advice. 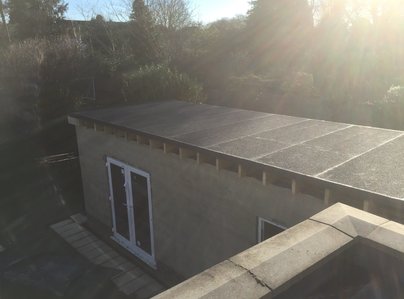 by 100% of customers
Sort by
Good reliable repairs
Customer Service
Quality
Value
dan and colleague did a lovely job of repairing + renewing our garage roof over two and a bit days. he spent an hour surveying the work beforehand, took care of boiler pipes fixed underneath + came in under estimate. it looks lovely and should see me out. it follows his repointing our chimney last year. no hesitation in recommending.
Customer in Greater London Posted on 04/05/2020 , work completed 14/03/2020
Recommended
Great service
Customer Service
Quality
Value
Bexley and Bromley Roofing Ltd. have done diverse repairs and replacements to my roof, fascias, soffits and guttering over the past two weeks. Always polite and punctual they worked to a high standard at a reasonable price. I am very happy with the results and I would certainly recommend them to others.
Customer in Kent Posted on 30/01/2020 , work completed 29/01/2020
Recommended
Excellent work
Customer Service
Quality
Value
Dan and his colleague replaced the timber joist, fascia and guttering to my garage. They arrived on time, were polite and the work was to a very high standard. They cleared away afterwards.
Helen, Sidcup Posted on 22/06/2019 , work completed 20/06/2019
Recommended
Professional job
Customer Service
Quality
Value
Have used Dan a number of times now for our shed and garage roofs and we’ve always been really pleased with the work. It’s a professional friendly service, reasonably priced and I would definitely recommend him to others.
Customer in Greater London Posted on 14/02/2019 , work completed 12/02/2019
Recommended
Roofing repairs
Customer Service
Quality
Value
Dan arrived on time to survey the roof to be repaired, was very professional and confirmed the project duration and cost. We subsequently received an all inclusive written estimate. Dan and his colleague arrived on the date and at the agreed time and the work was carried out professionally and to a very high standard. The site was completely cleared of all rubbish and we received an itemised invoice detailing all of the works completed. We would have absolutely no hesitation in recommending Bexley & Bromley Roofing Limited.
Customer in Greater London Posted on 08/02/2019 , work completed 07/02/2019
Recommended
First Class workmanship and service
Customer Service
Quality
Value
Ask this company to give me a cost estimate, there were 2 others, I had also asked, in the Sidcup area. Needed Soffix and Facia replacing. Was so impressed with Dan's approach, which felt was professional and helpful. I asked him to carry out the work. He provided a written estimate that included everything, materials and labour. Also arranged for scaffold to be erected, which was later helpful and appreciated by painters who were due to paint the external walls. He was very accommodating and worked with the painters so they didn't overlap. Dan and helper arrived promptly each morning and got working with no fuss. He had helpfully given me small piece of the Uvpc Soffit that he uses which was good because initially I was going to use Wood. There were a couple of unforseen snags, the main one regarding the down pipe from roof gutter which was over flowing at the point of entry into the ground. Not his fault. We later found a way around this and it worked out fine. His standard of work is extremely good, he takes pride in doing a good job and pays attention to small detail. I would definitely recommend him for this sort of work. And am happy for people to inspect his work by arrangement with Dan.
N918539722 Posted on 10/09/2018 , work completed 10/09/2018
Recommended
Excellent work
Customer Service
Quality
Value
The most courteous and honest man we have had as a tradesman in our home. He did a great job and informed us at every stage on our flat roof and the clean-up was excellent.
Colin, Kent Posted on 06/03/2018 , work completed 06/03/2018
Recommended
Another great job
Customer Service
Quality
Value
Dan replaced the flat roof on my extension a couple of years ago and did a great job so when my sister-in-law needed her flat roof replaced we got Dan in again. The guys are very polite, very tidy - all materials were removed at the end of the job - and completed the job on time. Overall very good value and would certainly use them again. Thanks again guys.
Blueat32 Posted on 08/01/2018 , work completed 08/01/2018
Recommended
Excellent Replacement of Side Dormer Flat Roof
Customer Service
Quality
Value
I would highly recommend Dan. He was very flexible and understanding with his appointment times and the new flat roof is really great. Completed ahead of schedule. Very professional.
oxo124 Posted on 06/12/2017 , work completed 06/12/2017
Recommended
Great service nice guys
Customer Service
Quality
Value
I employed this company to replace my old flat roof The guys were friendly and very approachable Their work was first rate and they were very helpful tidying up and looked after my home when walking through my hall I would recommend them to all my neighbor's
2011-07-26 21:24:51.72 Posted on 28/01/2017 , work completed 28/01/2017
Recommended
Which? Trusted Traders