J Paterson The Window Company take pride in supplying quality window and door systems to compliment ones home. We listen to our customers requirements and advise which products would be best.We have a showroom in Whitstable with a number of composite doors, French door, Bi Folding doors and a range of window styles to choose from. All our work is guaranteed for 10 years which is insurance backed and comes with deposit protection and our sealed units have a 20 year warranty. We mostly rely on recommendations from our customers and are very proud to be a Which Trusted Trader. Our window system we use is Rehau which comes with an A rated as standard and we can also offer a 36mm triple glazed window.All our doors and windows come with multi point lock and shootbolts as standard with internally beads for maximum security. All our windows and doors are made to the exact requirements of our customers and made to fit into their openings with a hassle free experience from survey to having the windows fitted. 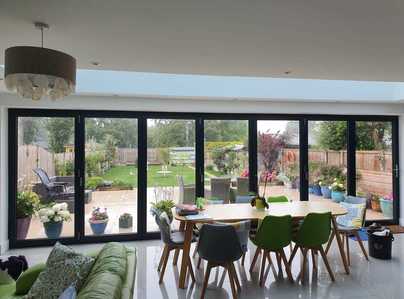 by 97% of customers
Sort by
Highly Recommend
Customer Service
Quality
Value
All windows, patio door and back door fitted to our complete satisfaction. Finish and fitting standard done to a very high standard. Would highly recommend.
Customer in Kent Posted on 19/11/2021 , work completed 26/10/2021
Recommended
10 year Guarantee is worthless (even after only 4.5 years)
Customer Service
Quality
Value
We had a Composite door fitted by “The Window Company” at the end of 2016. This warped and twisted after 4 years and was pulling the frame away from the house. Contacted John Paterson (owner) who attended and made some alterations to the hinge side, stating he would contact the manufacturer to request a new door to be manufactured as this one was faulty. John Paterson made little effort with the manufacturer and I had to chase him on several occasions asking for an update, in the end he stated “I cant do much more”. This left it to me to contact the manufacturer who were helpful in sending an engineer out to assess the door. Their conclusion from a thorough assessment was that the door frame had not been fitted according to their manufacturer guidelines and recommended the frame be removed and refitted correctly. They also agreed to supply a new door if required. I passed this information back to John Paterson who stated he was too busy to attend and relook at the door but would schedule a visit some point in the future. I heard nothing more and now he ignores my contacts after 3 months. The door came with a 10 year guarantee, which John Paterson "The window company" are not honouring. I am now left with a bent front door which has already started to move the frame once more and will only get worse over the remainder of my guarantee period which appears to be worthless.
Mr & Mrs Lloyd in Medway Posted on 11/10/2021 , work completed 20/10/2016
Thank you for your review. Whilst we appreciate your frustration, we do take issue with and dispute some of your points. As you know we agreed to install the Solidor you requested and had chosen prior to contacting us. Our recommendation has been for Solidor to replace your door and as you know they have now finally agreed to this. Whilst waiting for Solidor (your requested choice of door manufacturer) to agree to a new door, as you noted, we were happy to come out and try and adjust the door in the meantime. However lately contact has gone unanswered, so to resolve this for you we do request you email into the office so that the door can be replaced as agreed to by Solidor. We will always resolve any client issues and therefore request you contact the office again so that we can conclude this for you.
Prompt and professional
Customer Service
Quality
Value
Supply and installation of composite door. Installer arrived on time, was very pleasant and friendly. Carried out his work diligently which was completed in 3 hours to a very high standard of workmanship. End product was clean, tidy and high quality. I was very pleased and can recommend them highly.
Alan, Kent Posted on 29/03/2019 , work completed 29/03/2019
Recommended
Excellent Service
Customer Service
Quality
Value
I had nine double glazed windows fitted, the workmanship in the windows are very good. Fitter was tidy, efficient and very conscientious about his work
Customer in Kent Posted on 21/03/2019 , work completed 21/03/2019
Recommended
Excellent .
Customer Service
Quality
Value
Second time we have used this company, on both occasions we were very pleased with the products, service and workmanship. Work was carried out in timely and professional manner. No hesitation in recommending.
Christine, Kent Posted on 25/01/2019 , work completed 25/01/2019
Recommended
Roof Lantern Installation
Customer Service
Quality
Value
John was aware of our requirements for many months, as we were waiting for a fitting schedule from our builder. John spoke with the builders and advised them of exactly how to prepare the opening so the the internal finish would look good. Eventually when we got the green light from sight we had a matter of hours to get the order in to the supplier to catch the last delivery date before Christmas. I am very pleased to report that John managed to find a slot for the installation and the lantern has now been installed. Exceptional service. Well Done
Customer in Kent Posted on 19/12/2018 , work completed 12/12/2018
Recommended
Efficient
Customer Service
Quality
Value
Quality product, efficient, tidy fitters. Nothing was too much trouble. Extremely pleased with double-glazing. Would recommend and use again.
William, Kent Posted on 22/11/2018 , work completed 22/11/2018
Recommended
Excellent window replacement
Customer Service
Quality
Value
Our experience with The Window Company, was excellent, starting with the measurement process through to the actual window installation. The installation process was managed very professionally. It was completed to a high standard and the quality of the work and the commitment of the workforce to ensure the work was carried out as expected was commendable. All employees were courteous and helpful and we were able to communicate with the company in a very efficient manner. All of our queries were managed in a timely basis. We are very pleased with the outcome and extremely happy with the final product.
Customer in Kent Posted on 21/11/2018 , work completed 15/11/2018
Professional job
Customer Service
Quality
Value
I had 4 windows fitted all agreed at a convenient time to me, fitted, friendly and helpful.
Nikki, Kent Posted on 08/11/2018 , work completed 08/11/2018
Recommended
Great job completed to a high standard
Customer Service
Quality
Value
We had 5 windows and a new front door supplied and fitted by J Paterson and are really pleased with the work completed. Very straight forward to get a price with no hidden costs and without the fuss some window fitting companies like to go through. High standard of workmanship and the finish on the work completed is excellent. We Would definitely recommend and use again.
Antony Posted on 20/10/2018 , work completed 20/10/2018
Recommended
Which? Trusted Traders