Jacqueline and Michael Boswell would like to welcome to you to the Which? Trusted Traders profile page for Jackie’s Dragon Roofing Epsom.

Based in Epsom, we offer roofing services in Surrey and South West London.

If you need to repair or replace your roof, call Jackie’s Dragon roofing to get a great quote today! 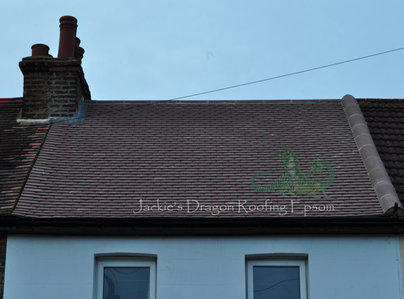 by 100% of customers
Sort by
Repair of long standing roof problem
Customer Service
Quality
Value
Jackie reviewed the longstanding problem with our roof and undertook the work very quickly and expertly. The price quoted was very reasonable and the work carried out very efficiently in just 2 days. Our roofing problem is now resolved thanks to Jackie and her team's work. Would highly recommend - excellent workmanship, fair price and explained clearly what was required.
Elizabeth in Surrey Posted on 27/12/2021 , work completed 20/12/2021
Recommended
Great work that gives peace of mind
Customer Service
Quality
Value
My roof had been leaking for some time and none of the roofers I had got in previously had either managed to solve the problem or had persuaded me that they were capable of doing so. Enter Mike and Jackie. I just knew that they would get the job done correctly, not only does their website carry the Which Trusted Trader accreditation, but also from speaking to Jackie, she was willing to provide references and photos from previous customers but most tellingly of all, Jackie promised to resolve the problem, even if she had to come back for more than one visit. This was music to my ears, and this really does set them apart. It was a lot of work to remove the old flashing, resolve the issues that were lurking underneath, install new flashing and point the brickwork appropriately, but it was all done in two days, which was really appreciated. The damp patches on my loft walls are slowly receding, and when it rained last weekend there was no further ingress of water. I really wish I'd got Mike and Jackie in when I first discovered the leak, it would've saved me so much aggravation. I recommend them without hesitation or qualification. They're pleasant people to have around, and you can rely on them to get the job done to a very high standard and leave the site as they found it. Brilliant, thank you so much.
Customer in West Sussex Posted on 23/09/2021 , work completed 16/09/2021
Recommended
Flat Roof complete replacement
Customer Service
Quality
Value
What a pleasure working with Jackie's Dragon Roofing, from first contact to the final day works were completed.
Customer in Greater London Posted on 18/09/2021 , work completed 27/08/2021
Recommended
Good professional job.
Customer Service
Quality
Value
Very honest and decent people. I thought I needed a new garage roof but they advised repairing and sealing would be sufficient and much cheaper. They also replaced guttering and downpipes on the house. I was very pleased with the work. It was done over a longer period than I expected but it was December so not ideal weather for outside work and I made it clear it wasn't urgent work, so no complaints. I would definitely recommend this company.
Sally in Greater London Posted on 03/06/2021 , work completed 19/03/2021
Recommended
Excellent customer service
Customer Service
Quality
Value
I contacted Jackie's Dragon Roofing in July 2020. Since then they have carried out 5 different roofing jobs for various members of my family. All work has been completed to a good standard and within the agreed timescales. Work has included repairs to flashing & tiles around a Velux window, replacement tiles, taking down a chimney stack and replacing soffit boards. In two cases they were carrying out work to elderly vulnerable members of my family. They were extremely thoughtful and caring at all times, particularly given the present Covid situation. I therefore have every confidence in them being able to deal with customers to ensure they feel safe at all times. I would not hesitate to use this company again if I require any further roofing type work.
Customer in Worcestershire Posted on 19/05/2021 , work completed 22/04/2021
Recommended
Great service
Customer Service
Quality
Value
Jackie and Mike arrived on time, laid a repair to our flat roof efficiently and were v friendly. Highly recommend.
Customer in Surrey Posted on 17/10/2019 , work completed 17/10/2019
Recommended
Repairs to roof
Customer Service
Quality
Value
I was very pleased with the attention to detail and preparations carried out for the roof repair and external paint work. They worked together very well as a team. Very good personal service.
Caroline, Surrey Posted on 05/09/2019 , work completed 05/09/2019
Recommended
Excellent quality of works
Customer Service
Quality
Value
Jackie and Mike very friendly and helpful.They were very reliable and they carried out the works on time and on budget (quoted price). After works completed they cleared away all rubbish leaving the area clean and tidy. Excellent job. I have no hesitation in recommending their services.
Customer in Surrey Posted on 12/08/2019 , work completed 09/08/2019
Recommended
Friendly, Reliable and Professional Service
Customer Service
Quality
Value
Jackie and Mike are very genuine and friendly people.They were thoroughly reliable. They came to quote and work when they said that they would. They got the job done capably and speedily. I have no hesitation in recommending their services.
Bulfin Posted on 28/10/2018 , work completed 28/10/2018
Recommended
Brilliant work and genuine people
Customer Service
Quality
Value
Jackie and her husband Mike are very genuine people which is very hard to find when your trying to get work done in your home.They really went the extra mile and I feel the price very good too.
Char94 Posted on 19/09/2018 , work completed 19/09/2018
Recommended
Which? Trusted Traders