Rich Electrical is a good, honest electrical firm set up by Ed Rich, a born and bred North Londoner who has a genuine passion for electrics. In fact, Ed’s wife, daughter and son frequently get pretty sick of hearing about inductive loads, ohm’s law, conductor surface areas and earth fault loop impedances…

Ed, being the bright spark that he is, retrained in his mid-twenties and, unlike lots of people that call themselves “Electricians”, has done a full-length City and Guilds 2330 level 2 and 3 and 2382 17th Edition course, so is fully qualified and also backed up by the NICEIC’s Part P competent person scheme, a legal requirement for anyone doing any serious install in domestic premises.

Ed will treat you and your house with the utmost respect – the little things like explaining what he is doing and why in a clear way, trying to save you money by finding ways around your electrical problems and cleaning up thoroughly all make for a more pleasant tradesperson experience. 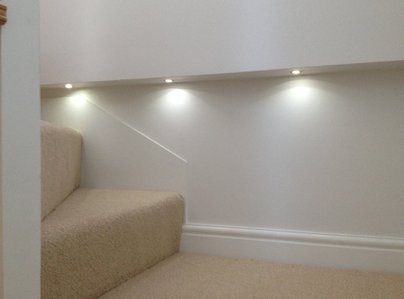 by 100% of customers
Sort by
Which? Local Review
Customer Service
Quality
Value
Ed was extremely helpful and efficient and just got on with the job without complaint, sometimes under trying circumstances. We had a lot of electrical work done including a full rewire, the addition of various internal and external lights, sensors, CAT5 and AV services, low voltage lighting, extractor fans etc. Always pleasant and helpful and most importantly communicative. Every step of the way Ed talked to us about the work, how we wanted things setup and so on, arranged times and dates to suit everyone involved and did a splendid job. I was particularly taken with the amount of thought that went into everything he did, I am sure other electricians wouldn't have paid so much attention to our needs and installed everything for OUR benefit and not just for the ease of installation.
vince.picton Posted on 22/08/2014 , work completed 22/08/2014
Recommended
Which? Local Review
Customer Service
Quality
Value
Ed, is starting his own business and making a good name for himself by being extremely professional, hard working and proactive. He never focuses on finding problems or shifting blame to other tradesmen, instead he finds solutions at whatever you throw at him. He was amazing. We hired him to earth a few sockets he ended up doing the rewiring of our semi-detached house, change all lighting, LED spot lights, power sockets and light swtiches, having to lift floor boards and trace wiring to the walls under the plaster. Not to mention that half way through his job we had a problem with a builder and the project was on hold for 3 weeks. Despite this stand-still completely caused by another tradesman, he never complaint, instead he got straight into the job as soon as it was back up and running, hecomplete the work with no hiccups! Ed will have a brilliant future in his profession. Very reasonably priced, he never increased his core rate. In more than one occasion I have had to insist for him to charge for additional visits and despite this he has never done so. We are happy to recommend him to anyone (small or big jobs) and will be advising him to give us as reference for future costumers.
agraves Posted on 01/07/2014 , work completed 01/07/2014
Recommended
Which? Local Review
Customer Service
Quality
Value
Young man starting his own electrical business having learnt his trade working for firms in the industry and recommended to us by friends. Really personable, friendly and helpful (our problem was a bathroom light not working and it turned out to be an issue with the fitting - Ed went off to a local building merchants to find another for us so he could replace it there and then). Apparently he does the full range of electrics from a complete re-wire to sorting out individual problems (as in our case). Despite only being in business on his own for a few months his order book is very healthy and I can see why - we shall certainly be recommending him to other friends. His charges were very reasonable as well!
David Airey Posted on 08/02/2014 , work completed 08/02/2014
Recommended
Which? Trusted Traders