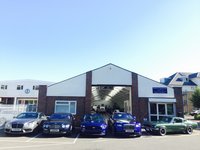 We work with ALL Insurance Companies on Accident Repairs and can manage your whole claim for you at no extra cost.

For a FREE no obligation estimate call 01932 240 471 or email info@sandowncoachworks.co.uk

Our full range of services are available to view at www.sandowncoachworks.co.uk 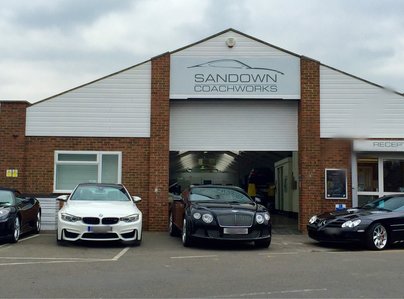 by 88% of customers
Sort by
Very pleased with this company
Customer Service
Quality
Value
This company has recently repaired my Nissan Navara after an accident just before Christmas. I have to say that it came back literally as new. The paintwork is flawless and I’m delighted with it.
Customer in Surrey Posted on 20/01/2021 , work completed 19/01/2021
Recommended
Very professional customer service from Louis at Sandown, Shepperton
Customer Service
Quality
Value
After my car was damaged by a reversing 4x4 in a church car park, the miscreant simply drove away. I did an extensive search to find a relatively local bodywork company and top of the list was Sandown Coachworks at Shepperton. Their website was detailed and was the most professional by far. I turned up one afternoon without an appointment (as per the website) and was greeted by Louis who inspected the damage and then gave an in-depth verbal report. He then promised to produce a detailed estimate, which was e-mailed to me just a couple of hours later. The bonnet would have to be replaced and a fair amount of front end respraying would also be required. The estimate was good value, considering the amountI was very impressed with his professionalism and amazed at the quality of the work going on in the workshop. As I was shortly to return home to Switzerland, I was determined to have the work carried out by Sandown some 6 weeks later. Unfortunately, just before leaving the U.K. I discovered that there was some hidden internal damage which prevented the bonnet opening. This necessitated having the work carried out in Switzerland. The reason for this feedback,when no work was carried out is that I was incredibly impressed by Louis and the quality of the work carried out on other cars, including many prestige models. I am not easily impressed and for the reasons indicated above, I have no reservations whatsoever in wholeheartedly recommending Sandown at Shepperton.
Peter Little Posted on 26/11/2018 , work completed 26/11/2018
Recommended
A car enthusiasts dream, thank you Sandown
Customer Service
Quality
Value
As a real car enthusiast I was delighted to find these guys, on talking to them, some of their backgrounds are amazing, real old school knowledge, enthusiasm, passion along with a dream workshop and latest technology. Repairs and restoration to my car were exceptional and beyond my wildest dreams, I love my classic car and these guys bought it back from the dead to show condition.
Mr A Singh Posted on 16/01/2016 , work completed 16/01/2016
Highly recommended, great work and quality
Customer Service
Quality
Value
Don't normally do this and its not very often I am so impressed with a business and its service that I feel he need too. Having been involved in a accident, my first call was to Sandown Coachworks who came up on Google as one of Surreys Leading Prestige Accident Repair Centres, they talked me through everything with my best interests at heart , they provided me with great advice and guidance. They even referred me away from services I know benefit them as was not right for me. On speaking to my insurance I declined to use there repairer and specified I wanted Sandown Coachworks to do it. The car was booked in , I was given a brand new Toyota and the car was repaired in 4 days. When I came to collect I was delighted, it was perfect , been professionally cleaned in and out, marks touched in and small scratches polished out at no extra cost. The people I met were so professional and I can recommend them to anyone.
Aaron Michaels Posted on 16/01/2016 , work completed 16/01/2016
Recommended
Amazing service and workmanship highly recommended
Customer Service
Quality
Value
Following an accident in my car, i spoke to my insurance company who tried to send me to some small approved garage, having had a bad experience in the past i decided to do some research and found Sandown Coachworks, they were great from start to finish, very professional and my car came back like new, not a cheap rush job like my insurance company did before when i listened to them and now deeply regret as you can see the repair a mile off. The car returned from Sandown Coachworks perfect , like the accident never happened with a long warranty and the customer service was outstanding. I only hope this review helps someone else stand up to their insurance company and use the right to choose (your legal right) the best garage to repair your car. Yes I dont think these guys are the cheapest but I have found you get what you pay for in life and as I pay a hefty premium for my insurance I wanted the best workmanship available.
Mrs D Martin Posted on 05/01/2016 , work completed 05/01/2016
Recommended
Excllent customer service
Customer Service
Quality
Value
A couple months ago, I was in a car accident and my car needed repairs. Sandown Coachworks completed these repairs through my insurance company and Waren personally carried out the work. He was professional and trustworthy and the customer service on the whole was excellent.
MrsL123 Posted on 16/10/2014 , work completed 16/10/2014
Recommended
Good workmanship
Customer Service
Quality
Value
Used Sandown when I had a collision. I had damage to side window which was replace and bodywork sorted to do. They were helpful, efficient and there workmanship was great.
M , Esher Posted on 08/09/2014 , work completed 08/09/2014
Recommended
Great Service
Customer Service
Quality
Value
2 jobs. Bentley fault light for bonnet came up on dashboard they sorted this cheaper than going through Bentley. Another Bentley bumper damage from accident Kindertons Accident Management Co. contact them to sort replacement car whilst repairs done. They worked together. I found them to be Reliable Trustworthy They give great Service and great Communication between you and them.
John, LONDON Posted on 01/07/2014 , work completed 01/07/2014
Recommended
Which? Trusted Traders