We are a company that prides ourselves on our skilful and friendly work ethic. We always take into consideration the needs and requirements of the client alongside the health of the tree, the season and the surrounding environment.

All of our team are fully trained and NPTC qualified & all work is carried out to British Standard 3998 (Tree Work).
We are fully insured with public liability cover to £5 million & Employers liability to £10 million.

We offer free, no obligation quotes & advice which are competitively priced. We will also carry out TPO & Conservation area checks and will apply for council permissions if required, free of charge for our clients. 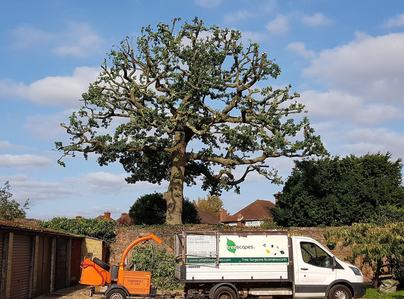 by 100% of customers
Sort by
Absolutely brilliant
Customer Service
Quality
Value
We chose Danny Smith of Urban Treescapes after seeing sevral other tree surgeouns. He came across as honest and very helpful. He carried out the work professionally without any fuss and within the time he had given us. I offered to pay him on account but he insisted that I should pay him after all the work is finished and after we are satisfied. The work was done to an excellent standard. I have no hesitation in recommedning him.
Customer in Greater London Posted on 24/05/2022 , work completed 24/05/2022
Recommended
Conifers trimmed & topped
Danny came by appointment to see the work involving sympathetic trimming of three conifers along one side of our garden. They had been topped some 10 years previously, but width was now the main concern. Danny understood the requirements, and submitted the quotation a couple of days later, and answered a query on the height requirement. He attended on time for the work on 5th November. Garden pots moved out of the way, and net over the water feature. All cuttings removed and shredded in the street. The work revealed too much of an adjacent dead cherry, and a revised price to include the cutting back agreed. Job completed to a high standard including clearaway.
Customer in Hertfordshire Posted on 09/11/2021 (Reviewer did not use service)
Recommended
Excellent!
Customer Service
Quality
Value
Urban Treescapes did a thoroughly professional job to our complete satisfaction. We have no hesitation in giving our unqualified recommendation - for their agility as well as their work! They listened and advised and were extremely helpful in every way. The entertainment of watching them in the trees was free!
Frank in Greater London Posted on 09/07/2021 , work completed 08/07/2021
Recommended
Overhanging tree clearance
Customer Service
Quality
Value
Danny, took my call, came over to give me a quote and explain what he would do. On the scheduled day, he came on time, and removed the overhanging branches as he had explained. All done very professionally. Thank you.
Rahul in Greater London Posted on 28/05/2021 , work completed 21/05/2021
Recommended
Urban Treescapes - outstanding service
Customer Service
Quality
Value
Urban Treescapes felled a large tree in our garden and we we're really impressed with their work. The tree was leaning and Danny at UT established recent movement and that it was in danger of falling onto our neighbours ' drive. He dealt with an urgent permission application to the local authority and did the work within a few days of getting the approval. He quoted the price a day after first inspecting the tree and overall the whole job was done very quickly and efficiently. On the day Danny and his colleague managed the process in a way that the neighbours were not inconvenienced. I would strongly recommend Urban Treescapes for their expertise, efficiency and for providing a complete service.
Customer in Hertfordshire Posted on 22/05/2021 , work completed 17/05/2021
Recommended
Lovely team, professional and efficient
Customer Service
Quality
Value
From the start Danny and Andy were professional. Danny came to survey our property and took the time to explain what we could achieve in our garden which falls in a conservation area - he explained the shrubbery and trees and how we could manage our garden going forward whilst trimming back and felling some trees. Whilst undertaking work we had to deal with some difficult neighbours and Danny and Andy were able to manage the situation for us and for this we are extremely grateful - would 100% recommend to friends and family.
Customer in Greater London Posted on 07/05/2021 , work completed 06/05/2021
Recommended
Very friendly helpful bunch
I live in flats where Urban Treescapes worked on the communal gardens. They were so considerate and friendly - in the middle of a neverending lockdown, it was great to have a visit from some decent folk! Lovely job on the trees too and tidied up well afterwards, will definitely use them if I ever have need locally.
Helen in Greater London Posted on 25/02/2021 (Reviewer did not use service)
Recommended
What more could you ask for?
Customer Service
Quality
Value
We’ve used Danny twice recently. First, he removed a house-threatening eucalyptus. Then he trimmed a cedar whose branches were overshadowing most of the garden after he got the necessary permission from the District Council. Rather him than me, sitting on a slim branch 30 feet up with his chainsaw. He came when he said he would, charged what we’d agreed, saved us the hassle of Local Authority paperwork and left nothing behind except a neat eucalyptus stump and an elegant cedar profile - all done cheerfully. What more could you ask for?
Customer in Hertfordshire Posted on 06/11/2020 , work completed 23/10/2020
Recommended
Periodic Tree Maintenance
Customer Service
Quality
Value
Thanks to Allan & Danny for a tidy, competent and efficient job on three completely different trees. If your looking for knowledgeable, reliable professionals, look no further.
Roy in Hertfordshire Posted on 06/11/2020 , work completed 03/11/2020
Recommended
Cat rescue!
Danny was great - he rescued our cat from 50ft up in the neighbour's tree but he had her down securely and safely in about 15 minutes! This is the second time that Danny has helped us out in this way - highly recommended!
Customer in Hertfordshire Posted on 15/10/2020 (Reviewer did not use service)
Recommended
Which? Trusted Traders