Which? Trusted Trader of the Year profile: Electricians in Reading

Chris Gordon of Electricians in Reading picked up the Which? Trader of the Year Award on 25 May 2016. We caught up with him two months later to find out more about him, his business and where it is going from here
Rebecca Milligan

Chris Gordon is a man on top of the world. The 29-year-old owner and manager of Electricians in Reading collected the Which? Trusted Trader of the Year award on 25 May, got married on 25 June and landed the largest contract of his career on 25 July. Oh, and he’s recently completed an engineering degree at the Open University.

Chris and the Electricians in Reading team hosted a celebration in Broad Street Mall, Reading, where they showed off the Trader of the Year award. They used the occasion to raise money for the Daisy’s Dream charity, which supports bereaved children – something that is close to Chris’s heart thanks to his own experience. 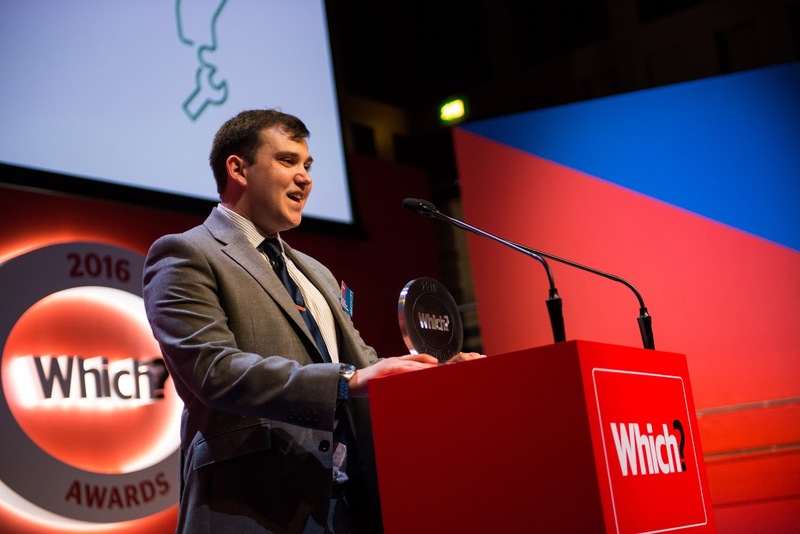 Chris Gordon never wanted to be an electrician. Growing up in Jersey, he had his heart set on being a sailing instructor. He moved to the South of France as a teenager to follow his dreams. Although he was never going to be Ben Ainslie, Chris credits his time at the sailing academy with setting him on the right track and providing some much needed stability at a difficult time in his life.

Left on his own at age 16, after he lost his mother to cancer he had no idea of what to do with his life and certainly gave no thought to qualifications. He left school before taking his GCSEs. University ‘was just some imaginary place where rich people go,’ said Chris, ‘If I hadn’t found that sailing instructor’s advert for a centre where they supplied your food and accommodation, I don’t know what I would have done.’

Chris enjoyed the work, ‘It was great,’ he said, ‘you were only working four or five hours a day, in the sunshine, teaching people to sail. It was a brilliant job.’ But after a couple of years, Chris took the decision that he needed to settle to something more serious than sailing around the Mediterranean and swapped the South of France for an electrician’s pre-apprenticeship in Scotland.

Chris first got the idea of having his own business from one of his tutors, Jim, who saw some promise in the young trainee. ‘Jim said if I wanted to work for him to be there at 6am on Monday. I wasn’t sure whether he was joking or not,’ said Chris, ‘but I turned up and he encouraged me and showed me the basics of running your own business.’

All this hard work started to unravel when Chris started a formal apprenticeship, with a different company. He found himself apprenticed to a rogue trader, who didn’t treat Chris or his customers fairly. It was there that the idea of having his own business, where he could look after his customers really took hold. ‘The whole way through that, I thought it was no way to run a business,’ said Chris. ‘The boss would tell me that customers had bought their own house and now it was time for him to buy his. Business was ruthless and so on. I just never understood why it had to be like that.’

With his apprenticeship on the line, Chris stuck with it for about a year and a half before things came to a head. Unable to stomach the dishonest practices, he left without knowing whether he’d be able to qualify. Luckily he was able to complete his apprenticeship with a decent company who showed him how a business should be run.

Setting up in business

Setting up a business is tricky, and so it proved for Chris when he started out in Reading. ‘I thought I could transition by setting up a couple of PAT-testing businesses alongside my main work,’ he explained, ‘but I ended up spending a lot of money and didn’t get any jobs.’

His nautical connections came to the rescue, when he got work with a passenger boat company on the River Thames in 2012. He worked part-time as a boat-master as well as servicing their electrics. He tried to build his network, but it was slow-going to start with, as Chris says, ‘I didn’t know anyone in Reading, so didn’t have that initial recommendation from friends and family.’

He set up Electricians in Reading as a limited company to try to boost his appeal but made the mistake of charging himself out too cheaply in an effort to build up the business. As he explains, ‘Looking back, that had a detrimental effect. I wasn’t winning many quotes. It took me a long time to realise that I was too cheap and that worried people – they thought I wouldn’t do a good job.’

Marketing wasn’t the only challenge. Finance was an on-going problem. ‘There were a lot of points where I was worried how I was going to put £10 worth of diesel in the van to get to a job, for say £100’ said Chris. ‘That was a dilemma quite a lot of the time. My partner was supportive but when I didn’t have any money, she would tell me to go and get a proper job. But I believed in the business.’ 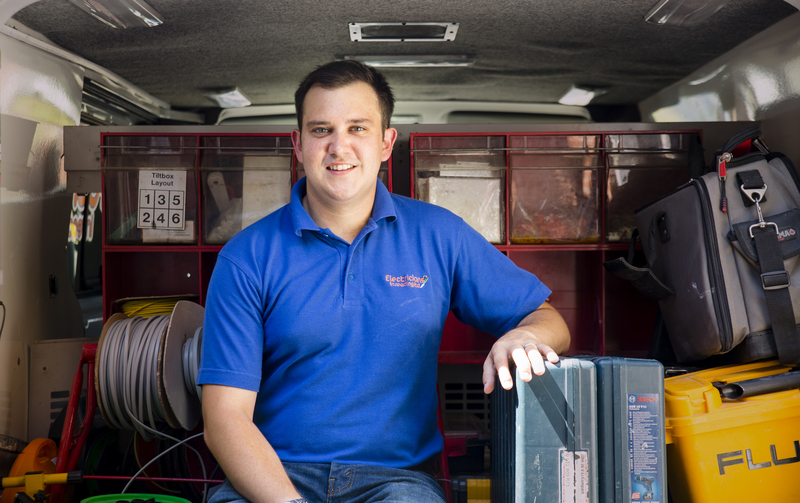 Ultimately it was his connections on the passenger boats that got the electrical business going. ‘One of the passenger boats that I was working on had a major fault and needed rewiring,’ said Chris, ‘then the owner of another passenger boat company called me to come and do some work on his boat. It turned out he had a restaurant and quite a few properties, up in Oxford. So we started going round Oxford and when I started getting the van seen, moving around doing different jobs, things started picking up a bit.’

The power of two

A big turning point for Chris came when he took on his first employee. ‘Before I employed someone, I thought if I didn’t have a job for a day, ‘It doesn’t matter, I haven’t got any overheads that I can’t manage because I’m working from home’,’ he explained. ‘But then I landed a rewire and I needed someone to help me. So I employed someone and I was making a loss on the job and it drove me more to find work as I needed to pay them.

When you’re working with someone, it gives you more motivation to get work done on time and chase more quotes around and take on larger jobs. It gives you the ability to do that. So employing someone was a turning point and I wish I hadn’t put it off for so long.’

Becoming a Which? Trusted trader

At around the same time, Chris came across an advert on Facebook for a new endorsement scheme: Which? Trusted Traders. Chris was one of the first traders to sign up and his business has grown along with the scheme.

He was already a member of Elecsa, the electrical trade association, and was always motivated to provide good customer service but as he says, ‘Being part of Which? has certainly driven me to make sure that everything is right in the business and make sure the customers are happy. I wear the Which? badge with pride. It says we are transparent. If you’re not happy with what we do for you, you can go to Which? and they will make me sort it out for you.

I wouldn’t be where I am without Which?, I don’t think. Being a Which? Trusted trader means I can give customers that extra bit of trust and faith they need that we’ll do a good job. People are nervous of being ripped off, so they need that reassurance and having that Which? Trusted trader badge behind you is the best reassurance you can give them.’

Which? Trusted Trader of the Year and beyond

Chris’s dedication to customer service netted him our Trader of the Month accolade twice, before he collected the big prize –  Trusted Trader of the Year at the Which? Awards ceremony in London in May. Electricians in Reading collected an award alongside some giants of the corporate world, including Google, Panasonic and Whirlpool. Sharing a stage with these enormous companies felt quite overwhelming for Chris. ‘I got very emotional,’ he said, ‘when they started reading out the review of my business, I realised we had won. I felt a bit dizzy. It was a huge pat on the back to say you’re doing the right thing, you’re doing right by your customers and your focus is on the customer. 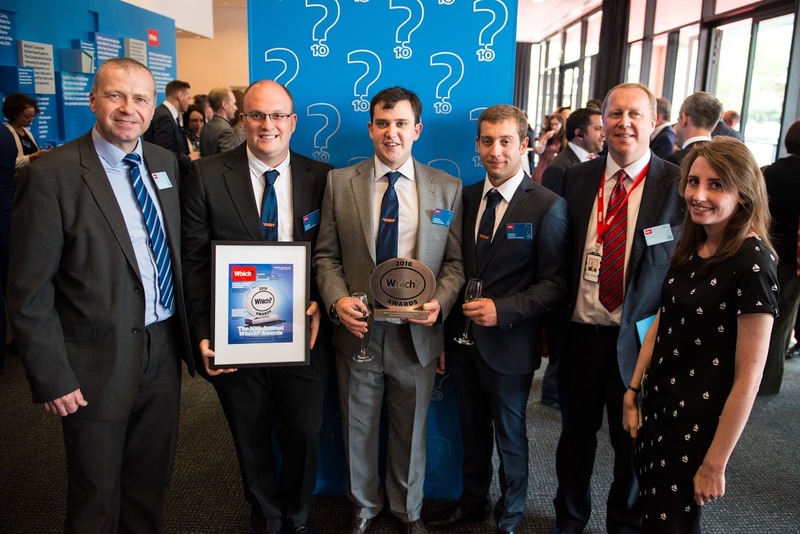 It just meant all the times when I was worrying about putting £10 of diesel in the van, it was worth it. Winning the award said that you’ve got to a level where you’ve made your business a viable business. It means your customers are happy, you employ people and they rely on you for work. It just felt like a huge amount of recognition for me, that I was doing it right and should carry on.’

Electricians in Reading has six employees now, working out of the business’ premises in Reading. But Chris doesn’t want to stand still, he’s keen to expand and get more vehicles out on the road. Winning Which? Trusted Trader of the Year has certainly helped.

‘We’re winning 99% of our work,’ he said. ‘We’re getting customers calling us, having seen that we’d won and they’re not even asking for quotes or prices. I’ll do them a quote anyway and they’ll respond in seconds asking when we’ll start. It’s given us an edge over other electricians in the area.’

After three 25s in a row that have been key dates for Chris, he’s looking forward to the next one. But as he says, ‘Winning the award is like winning the lottery to me,’ so he’s already hit the jackpot.