Here at Bates Plumbers we cover the Yorkshire area from full bathroom installations to bathroom adaptations for the elderly and disabled. We provide a service which is second to none from start to finish. We provide all the trades required to complete your dream bathroom with free quotes and design service available. Creating your dream bathroom should be an exciting time for all the family, which is why we make the process friendly, hassle free and enjoyable as possible. Our expert bathroom installers are multi skilled meaning most the work is carried out by them and not sub-contractors the only sub-contractors we use is a plasterer and electrician and use them all the time which limits the number of people coming in your home causing minimum disruption to your home is are aim leaving no mess behind. We aren't pushy salesmen, instead we offer honest free expert advice. That's why are reviews on which trusted traders / check a trade are consistently rated 8-10 for installations, tidiness and customer service. 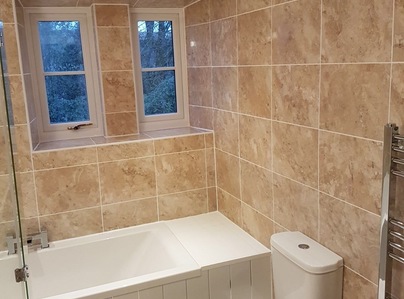