Are your trees in need of a bit of TLC?

Want a professional Tree Surgeon to take care of them for you?

If you are tree owner it is sensible to have your trees examined, by a professional tree surgeon, to find out if they are currently in good health. Recognising problems early on and using the proper treatments can deter any forthcoming health issues. By having continuous care you will be safeguarding the health of a tree or hedge and it will continue to look good and free from disease.

If there are mature trees in an area where the public have access, it’s advisable to have the trees checked to safeguard the public while in this vicinity.

Any work undertaken is done so with the upmost care for wildlife and the least possible disturbance to your garden. The area is always left spotless and in a shipshape condition. 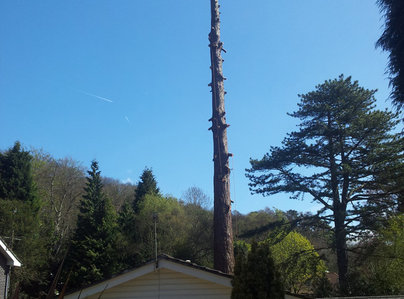 by 100% of customers
Sort by
Professional work carried out to extremely high standard
Customer Service
Quality
Value
Matt has trimmed my conifers and hedges for several years. When I first met him I was impressed by his promptness and subsequently his skill and the respect he had for my other garden plants which have never been damaged. I had, therefore, no hesitation in asking him to quote me for removing 5 large conifers which were only one foot away from the neighbour's boundary. Matt did the cutting down, whilst his 2 colleagues and he worked well as a team. He stuck to the quote and also did an extra job for me. His 2 colleagues were sociable and pleasant. He recommended a stump grinder who worked to Matt's high standards and was equally pleasant and proficient. I was delighted with the work and my neighbour was most impressed. Matt responds promptly to communication and answers questions clearly for he is extremely knowledgeable about the trade. I have no hesitation in recommending him.
Customer in Surrey Posted on 08/08/2021 , work completed 22/07/2021
Recommended
Efficient and Helpful
Customer Service
Quality
Value
Matt and his team removed 3 trees from our garden, that had died. Efficient, really helpful and tidied up well.
Tessa in Greater London Posted on 28/06/2021 , work completed 10/06/2021
Recommended
Very happy customer
Customer Service
Quality
Value
Absolutely wonderful, perfect, would recommend them a 1000%.
Which? Trusted Traders Consumer Posted on 25/03/2021 , work completed 19/03/2021
Recommended
Excellent service
Customer Service
Quality
Value
Estimate and work was carried out adhering to social distancing and to agreed schedule and price. Did exactly what we’d agreed & completed an extra job on the day. Punctual, polite, sociable and informative with an in-depth knowledge of the trade. Left the garden very tidy. Would highly recommend and use again.
Customer in Greater London Posted on 06/06/2020 , work completed 02/06/2020
Recommended
Mattree Professional Care
Customer Service
Quality
Value
They felled a very large oak on 02.12.19. They arrived promptly, worked efficiently and courteously, were very pleasant, and cleared up beautifully. I would recommend them to anybody, and will use them again.
Customer in Surrey Posted on 09/12/2019 , work completed 03/12/2019
Recommended
My review
Customer Service
Quality
Value
One of our neighbours had work done on their garden & were very satisfied, as were we. They trimmed back approximately 80" of fir trees.
Eleanor, Surrey Posted on 28/03/2019 , work completed 28/03/2019
Recommended
An excellent job
Customer Service
Quality
Value
When I first enquired about having my Liquid Amber tree pruned, Matt immediately replied and quickly arranged a site visit. The quote came quickly and we agreed a date for the job. I then had to change the date and Matt was very accommodating and flexible. The job was completed last week by his team and they did a great job. As well as tidying up once the job was completed, they moved my bird bath and feeder back that they'd moved to prevent any damage. I can't recommend Matt and his team highly enough, and will be calling on them again next time the tree needs a trim.
Customer in Greater London Posted on 18/03/2019 , work completed 15/03/2019
Recommended
A competent and professional job carried out to a very high standard
Customer Service
Quality
Value
Matt kept in contact with me prior to the work being undertaken. He made helpful suggestions as to how to improve aspects of my overgrown garden, including the difficult removal of tree stump which was right against a boundary wall. On the day, he and his team arrived early. The team worked hard. They were polite, efficient and tidy and showed consideration to our neighbours on both sides. They cut back a number of trees and hedges and removed a dead tree which threatened to fall on our neighbour's garden. They worked swiftly and efficiently and cleared away all the rubbish, including some not generated by them. Matt also arranged to cut back ivy which overhung our neighbour's property, something which was not in his original estimate. I have employed a number if firms to cut back my trees in the past and I can truly say that Matt and his team are the only ones with which I have felt the most comfortable. I would have no hesitation in recommending him and his team.
Customer in Greater London Posted on 04/03/2019 , work completed 27/02/2019
Recommended
Pruning Trees and Bushes. Sourced and planted a Portuguese Laurel Tree
Customer Service
Quality
Value
This is the second time that we have used the services of Mattree Professional Tree Care and we were very happy with the job that they did the first time. We asked him to recommended a tree for us and to plant it. He took us to a tree nursery and clearly explained how the tree that he was recommending would be suitable for our requirements Matt and 5 colleagues turned up on the day that we agreed and on time. They expertly pruned trees and some shrubs, removing all of the branches and left our garden tidy. He successfully planted a Portuguese Laurel Tree. We would use his services again.
Customer in Greater London Posted on 01/03/2019 , work completed 05/02/2019
Recommended
Did all asked
Customer Service
Quality
Value
Second time I have used Matt. Always found him competitive, as good as his word. Gave start date and held to it despite heavy workload. Did the job well and cleaned up at the finish. A+.
William, Surrey Posted on 24/01/2019 , work completed 24/01/2019
Recommended
Which? Trusted Traders